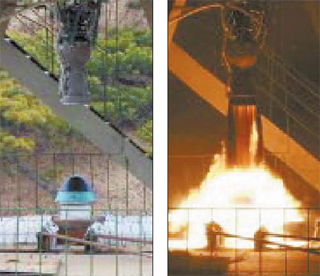 North Korean leader Kim Jong-un oversees a simulation of a ballistic missile re-entering the atmosphere with a warhead at an unknown location in this photo released by the North’s Rodong Sinmun on Tuesday. [RODONG SINMUN]

North Korean leader Kim Jong-un said Tuesday that his country would test a nuclear warhead and ballistic missiles “in a short time.”

Kim made his remarks as he led a test of a new technology that would allow a ballistic missile armed with a warhead to re-enter the earth’s atmosphere, the official Korean Central News Agency reported. It did not say where the test was carried out.

Analysts have said North Korea lacked that technology in the past.

“We have proudly acquired the re-entry technology possessed by a few countries styling themselves as military powers by dint of self-reliance and self-development,” Kim was quoted as saying. 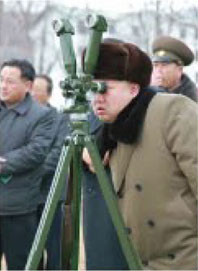 The news agency reported that Kim promised a nuclear test “in a short time” as well as tests of several kinds of ballistic rockets able to carry nuclear warheads. It also said that Kim vowed to develop more means to make military strikes.

The South Korean government warned the North on Tuesday that it would face punishment from the world if it conducts such tests, a spokesman for the Ministry of Foreign Affairs said at a briefing.

At a Cabinet meeting early Tuesday, President Park Geun-hye said North Korea will walk the path of self-destruction if it refuses to change and keeps making provocations.

Tensions on the Korean Peninsula have continued to escalate since the North conducted a fourth nuclear test on Jan. 6 and a long-range missile test on Feb. 7, both of which were prohibited by UN resolutions. The UN Security Council expanded sanctions to curtail the North’s nuclear program in response, and several countries imposed unilateral sanctions.

The North has stepped up its bellicose rhetoric against South Korea and the United States since last week as the two allies kicked off their largest-ever military exercises and launched amphibious landing drills with more than 300,000 South Koreans and 17,000 American troops.

Early on Tuesday, a military official reiterated that the South Korean government believes the North has yet to secure missile re-entry vehicle technology.

The technology has been considered the final step for the North to be able to attack the U.S. mainland with a missile that can carry a warhead to an altitude of 1,000 kilometers (620 miles) and re-enter the earth’s atmosphere, withstanding temperatures of around 6,000-7,000 degrees Celsius (10,800-12,600 degrees Fahrenheit).

Analysts have raised concerns that North Korea is successfully reducing the size of its nuclear warheads.

“There is enough open source evidence to take seriously the possibility that North Korea has developed a compact fission device that is approximately 60 centimeters [2 feet] in diameter and weighs between 200-300 kilograms [440-660 pounds],” said Jeffrey Lewis, director of the East Asia Nonproliferation Program at the James Martin Center for Nonproliferation Studies, in a post on 38 North last Friday.

“One of the big questions about North Korea’s nuclear program is whether or not North Korea can design a re-entry vehicle that will protect the warhead during its journey from launch to target.”

Experts view a possible fifth nuclear test as a sign that Kim Jong-un is consolidating his power ahead of the North’s ruling Workers’ Party congress scheduled for May, which will be the first in more than three decades.