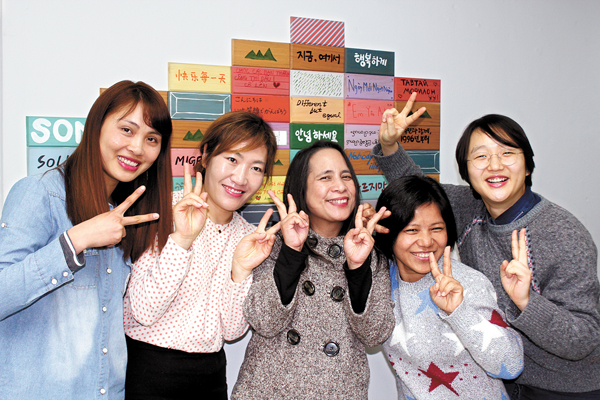 A group of translation cooperatives for immigrants, the first in Korea to be operated by female immigrants, will be helping out foreign residents with communication problems starting next month.

“There are a number of immigrants who can’t even read the text messages the government sends to warn people of emergency situations,” says Tess Manangan, 46, chairwoman of Link Migrant Interpretation and Translation Cooperative. “We will become the mouths of foreign residents in Korea who have difficulty in communicating.”

There are seven Koreans and four female immigrants from the Philippines, Vietnam, Nepal and China currently working for the cooperatives, which plan to hire more participants before operations officially begin.

Manangan, a native Filipina, immigrated to Korea after marrying her Korean husband in 1993. An English tutor at the time, she met her husband while he was in the Philippines studying English.

After he returned to Korea, the two remained in touch and tied the knot one year later, despite disapproval from the husband’s family. The couple now resides in Daeyeon-dong, Busan.

At first, life in Korea was a series of difficulties for Manangan, who struggled with the language barrier, but her loving husband helped her comfortably settle into her new home.

“My husband told me all I had to know was annyeong haseyo (hello) to live in Korea,” she says. “But once I got here, I couldn’t even go grocery shopping by myself.”

According to Manangan, there were no institutions in those days helping multicultural families. In addition, she said there wasn’t anyone in the neighborhood she could talk to, so talks with her husband, and the occasional English conversation with her husband’s friends, was all she had.

“I felt lonely,” Manangan says, “and I often cried by myself.”

In 1996, Manangan, who was teaching in an English hagwon (private academy), took part in editing an English newspaper issued by Solidarity with Migrants, an organization working to improve the human rights of immigrants. Her Korean skills have since improved drastically, and in 2013, she began to apply these skills to helping others by doing translation work for immigrants living in Busan and southern Gyeongasang through Link, a subsidiary of Solidarity with Migrants.

However, she wasn’t satisfied with only providing help to immigrants who live near Busan and other parts of southern Gyeongsang. She wanted to reach out to more foreign residents.

In order to secure the necessary revenue, Manangan and Han A-reum, who used to work as Link’s management director, decided to turn the institution into cooperatives, owned and operated by its participants.

Nam In-seon, 39, from China, Lee Su-yeon, 40, from Nepal and Lee Ha-yeon, 29, from Vietnam, took part in the cooperatives. The cooperatives managed to acquire five million won ($4,200) worth of investment.

The cooperatives currently offer translation of 10 languages including Filipino, Nepali, Cambodian, Burmese, Mongolian and Uzbek. The association is even capable of offering professional translation of English, Japanese, Chinese and Vietnamese dissertations.

“In addition to the public services the cooperatives have been doing, we also want to start profit-making businesses and acquire a social business license so we can offer quality jobs to immigrants,” said Han, currently the executive director of Link Cooperatives.