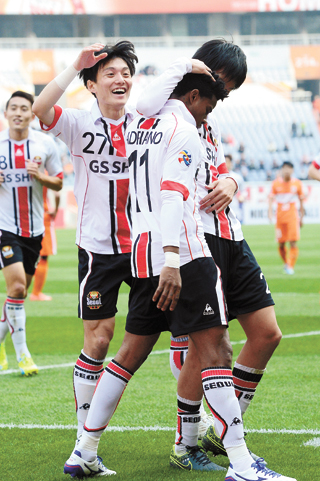 Foil fencer Nam Hyun-hee secured her spot in the last Olympics of her career after winning bronze at the FIE Grand Prix in Havana on Sunday. [YANG GWANG-SAM]

FC Seoul players celebrate after Carlos Adriano scores a goal during a 4-1 winning match against Shandong Luneng FC at Shandong Provincial Sports Centre during the Asian Champions League (ACL) group stage yesterday. Adriano scored two goals for Seoul, including the last goal of the match in the 70th minute. Seoul is currently ranked first in the group with three wins, scoring 14 goals in the past three games. Adriano leads the ACL in scoring with nine goals. Seoul will host Shandong on Apr. 5 at Seoul World Cup Stadium for their next ACL match.[NEWSIS]