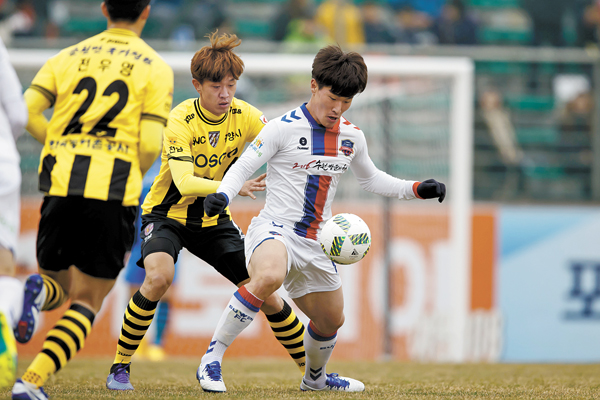 Some might have had doubts, but Suwon was unfazed on Sunday when it met Jeonnam Dragons who reached the semi-final of Korean FA Cup in 2015. In the first round of the K-League Classic match against Jeonnam, Suwon came out strong to show that the team has what it takes to compete in the top tier league.

After placing second in the K-League Challenge last season, Suwon earned promotion to the K-League Classic. The year was a milestone for the team who lingered in the second tier for three years. Despite concerns that the team might not be able to take on the teams in the top tier division, it was evident that Suwon can stand their own with the top K-League teams after their 0-0 draw with Jeonnam on Sunday.

The philosophy of the game while in the K-League Challenge was simple - attack. The team’s infamous attacking strategy proved its worth. Starting with Lee Gwang-jin’s first shot four minutes into the match, Suwon showered Jeonnam with 17 attempts on goal. Granted, Suwon was behind Jeonnam with only 45% of ball possession. But their number of shot attempts surpassed Jeonnam by nine shots. Based on Sunday’s game, Suwon looked nothing like a team who has just climbed up from the lower division.

There were some disappointments as well, namely the precision of its attack and the ability to finish shots. Out of 17 shots by Suwon, only three were on target. Furthermore, even after the series of attacks, Suwon failed to net a ball. Suwon revealed not only its forte but also its weaknesses. Suwon manager Cho Duck-je said, “We had many opportunities but we were not unable to connect them with goals. I think my players were a little impatient.”

But it may be too early to fret about Suwon’s lack of goals. Two of its key offensive players were absent from the game against Jeonnam, namely Spanish offensive midfielder Jaime Gavilan and Belgian striker Marvin Ogunjimi, who joined the club right before the season began. Once they make their debut for Suwon, their presence on the field will bolster its offense.

Suwon will play their second game in the K-League Classic against Seongnam FC on Friday at home in the Suwon Sports Complex.