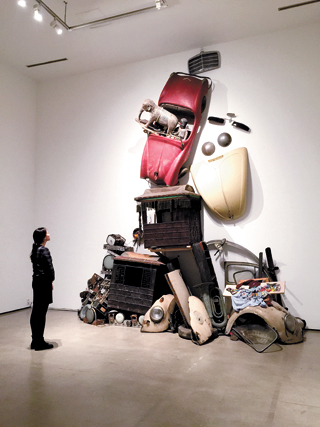 A staff member at Gallery Hyundai looks at Nam June Paik’s installation at the gallery in central Seoul.

Several exhibitions related to Nam June Paik (1932-2006), the Korean-born founder of video art, are scheduled for this year, as it is the 10th year since his death. Two of them are now on view.

For the “Wrap Around the Time” exhibition, the Nam June Paik Art Center in Yongin, Gyeonggi, has invited 10 local and foreign curators from outside the museum, including those whose jobs are not originally art curators such as a scientist, a novelist and a linguist.

Each of those 10 curators, along with the head of the museum, Suh Jin-suk, selected inspirational pieces from among the museum’s collection of Paik’s works. And then they each invited artists to create a new piece inspired by the Paik’s work, or already created a related work. The results comprise the exhibits.

The works by Paik are on display on the first floor of the museum, and on the second floor are the newly created works inspired by them. 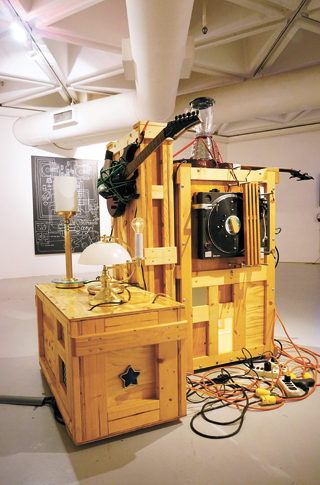 Meanwhile, “Nam June Paik: When He Was in Seoul” at Gallery Hyundai is more classic exhibition commemorating Paik. It features sculptures made of TV monitors by Paik in Seoul.

The gallery also re-created the stage for Paik’s 1990 performance in the gallery’s backyard. Paik performed a gut, a traditional Korean shaman ritual to comfort spirits, for German artist Joseph Beuys, who died in 1986. Beuys led the avant-garde Fluxus movement with Paik and others.