Filmmaker explores the art of surveillance

Filmmaker explores the art of surveillance 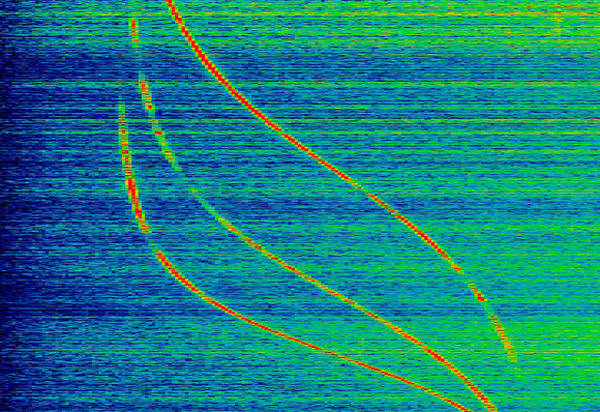 “Anarchist: Data Feed with Doppler Tracks from a Satellite (Intercepted May 27, 2009)” is part of Laura Poitras’ solo show at the Whitney Museum of American Art. [AP/NEWSIS]

But you might be asking it as you stroll through “Astro Noise,” journalist and filmmaker Laura Poitras’ exhibit at the Whitney Museum of American Art, in which images stemming from mass government surveillance are, in a number of cases, physically striking.

Take, for example, the patterns of bright greens, blues and oranges adorning the wall as one enters the exhibit. Seen from afar, they appear to be colorful modern paintings one might see in any contemporary museum. But actually, Poitras is presenting data - hacked Israeli drone feeds from a listening base in Cyprus. The original images were contained in documents leaked by former NSA contractor Edward Snowden.

“Definitely the piece is trying to work on multiple levels,” says Poitras, best known for “Citizenfour,” her Oscar-winning documentary about Snowden, and her news reports on the same subject, which won a Pulitzer Prize. “We found these fascinating colorful images that I was immediately compelled by. And they also have this fascinating story, so they work as news. We’re looking at intercepts from hacked Israeli drone feeds. But it’s not cynical. I like them as images, too.”

Though Poitras is best known as a filmmaker and journalist, she says her first solo museum show has given her a chance to explore the issues important to her in a medium even more suited to her way of thinking.

“I felt almost MORE at home,” she said in a recent interview. “The creative process was really liberating. It’s more abstract, which is what I like. It opened up new possibilities, and liberated me from things I’m happy to be liberated from.”

Though covert surveillance might not, at first glance, seem like a subject for exploration at an art museum, the Whitney’s director, Adam Weinberg, begs to differ.

“Artists reflect their times, and we are living in very complicated times,” Weinberg says. “It would be very strange if people were only dealing with questions of beauty and emotion at a time when the world is in such a state.”

For Weinberg, one of the most valuable aspects of the exhibit, which opened last month and runs through May 1, is that “it’s an experiential installation. It’s not just about information.”