Where Monet’s works come to life

Where Monet’s works come to life 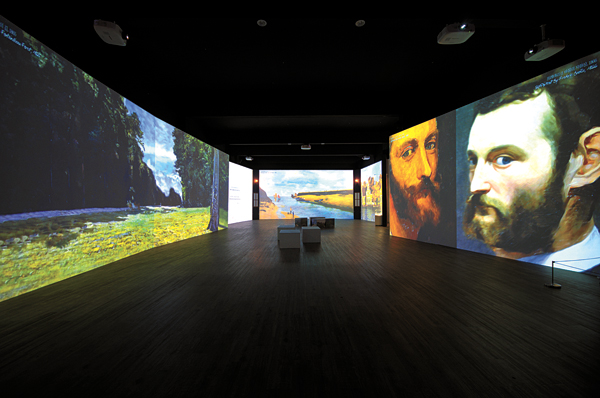 Enlarged digital projections of Monet’s paintings are displayed on the walls of “Monet’s Impressionism Exhibition 2016” running at the War Memorial Museum. [BON DAVINCI]

For those who are interested in Impressionism, the name Claude Monet (1840-1926) may ring a bell. The term Impressionism was derived from the title of one of his major works, “Impression, Sunrise.” Known for its depiction of light, Impressionism was a revolutionary 19th-century art movement.

Surprisingly, the exhibition “Monet’s Impressionism Exhibition 2016,” now running at the War Memorial Museum of Korea in Yongsan District, central Seoul, has no original paintings by Monet, although it centers on the Impressionist master.

Rather, all the exhibits are either replicas or digital projections. But the show extended its run by more than two months because of its popularity. Behind the popularity are the motion graphics and enlarged displays of paintings.

The exhibition is divided into the five sections based on milestones of Monet’s life and displays the art pieces via motion graphics using nearly 60 projectors on the 4-meter (13-foot) white walls.

Part II, “Drawing of Soul: My Friend, Lover and Colors,” showcased a series of landscape paintings that Monet painted under the tutelage of Charles Gleyre in Paris. This was when Monet was particularly interested in painting landscapes and nature. Monet is quoted as saying, “Nothing else interests me than painting the nature in this world.”

In front of the screen were chairs for visitors to sit in and just be immersed in the grand views of Fontainebleau. From “The Road from Chailly to Fontainebleau” (1864) and “The Pave de Chailly in the Fontainbleau Forest” (1865), with motion graphics, I could literally feel the life oozing out. His attention to color was apparent in “The Magpie” (1869) as well. The drastically contrasting colors of the black magpie on white shows his careful observation of color and light. Again, the enlarged display made even the smallest touches more apparent.

“Even a stone changes according to the light,” said Monet. The artist realized that the moment in front of him can never repeat because the light constantly changes. The lesson about light that he learned in Paris eventually became the identity of Monet and his artistry. The artist tried his best to capture the very moment in front of him, knowing it will never come back. By employing this technique, which was then considered unconventional, the artist captures the effect of light on things.

When Monet applied his attention to light to Camille, his wife and biggest source of inspiration, he created “Woman With a Parasol (1875).” Monet’s love for his wife can be felt in his paintings. With the constant movement of the projections, it felt as though that moment of Camille that Monet captured was still breathing and living on.

Admittedly, the combination of motion graphics and enlarged displays might make some visitors question whether this is a true Monet exhibit. But the ambience it created gave a whole new experience. Besides, the paintings can’t be everywhere at once, but the digital displays can make the valuable works more accessible to the public.