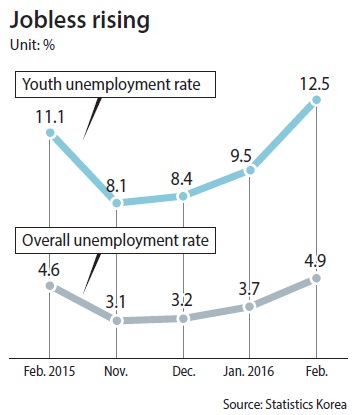 The most recent jobs report shows the economy is only getting worse, particularly for young Koreans. And a survey of big business shows that major conglomerates aren’t planning to hire many entry-level employees in the first half of 2016.

The government brushed off the disappointing statistics on jobs and predicted the situation will improve in March and April. But according to Statistics Korea on Wednesday, the unemployment rate for Koreans aged 15 to 29 in February hit an all-time record of 12.5 percent, 1.4 percentage points higher than a year ago. Overall unemployment rose to a six-year high of 4.9 percent after adding 0.3 percentage points from a year ago.

However, the Ministry of Strategy and Finance said it believes the rising unemployment rate for youths to be temporary. 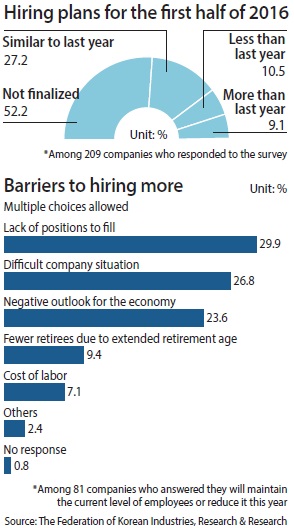 “Those who applied for entry-level government jobs during January and February rose to 223,000, which is 30,000 more compared to last year’s applicants,” said Lee Ho-Seung, director general of the economic policy bureau in the Finance Ministry, on Wednesday. “The unemployment rate of the young rose partially because these applicants were considered unemployed and categorized as people still searching for work when the survey was conducted.”

Lee added that February is the time of year when the unemployment rate spikes because many college students graduate.

Older job seekers are having an easier time than the young. Last month, over 337,000 people found jobs, boosting the number of people working to 26.7 million, a 1.3 percent increase from a year earlier. Of those who found new jobs last month, nearly 70 percent were people 50 or older.

The situation doesn’t appear ready for a turnaround as many of Korea’s leading companies have decided to hold back on hiring in the first half.

In a survey released Wednesday by the country’s biggest business lobbying group, the Federation of Korean Industries (FKI), less than 10 percent of the 209 companies that responded from a pool of the top 500 companies by revenue plan to hire more people this year than in 2015. More than half of the top-tier companies have yet to finalize college graduate recruitment plans.

Among the participants, 109 companies, or 52.2 percent, said they have not laid out a complete recruitment plan for newbies, while 27.2 percent said their recruitment will be similar in size as last year.

Only 9.1 percent said they plan to hire more college graduates than last year.

The reasons for not hiring included a lack of new positions to fill and shrinking revenue.

“Due to difficult economic conditions at home and abroad, over half of the companies have yet to finalize their recruitment plans,” FKI spokesman Song Won-gun said. “We are concerned the unemployment problem might worsen this year.”

Government recruitment isn’t going to help much, since it plans to recruit merely 1.85 percent, or 4,120 people out of 223,000 applicants, for entry-level positions. Some labor analysts compared Korea’s job market to Japan’s 20 years ago, when it started struggling with deflation.

“The unemployment rate for youth in Japan continued to rise more than 10 years since its [asset] bubble burst in the early 1990s,” said Ryu Sang-yoon, a senior analyst at LG Economic Research Institute. “The unemployment rate fell slightly after 2003 largely because of a shrinking youth population. But by quality, it did not improve.

“The situation that Korea faces today, including growth and its population, is very similar to that of Japan two decades ago,” he said. “If we fail to recover our growth potential, youth unemployment will continue for quite a long time.”

But the nation’s top 10 conglomerates, including Samsung and Hyundai Motor, said they will continue to recruit new hires at around the same level as last year or higher, according to industry sources.

Hanwha Group, which is among the top 10 conglomerates, was the only one that had reduced hiring plans. Hanwha said it hired an exceptionally large number last year.

Companies popular with college graduates, including Samsung and CJ Group, started accepting applications for recruitment on Monday, and affiliate companies of Hyundai, SK and LG started even earlier.

The ministry said it will try to find ways to solve some problems.