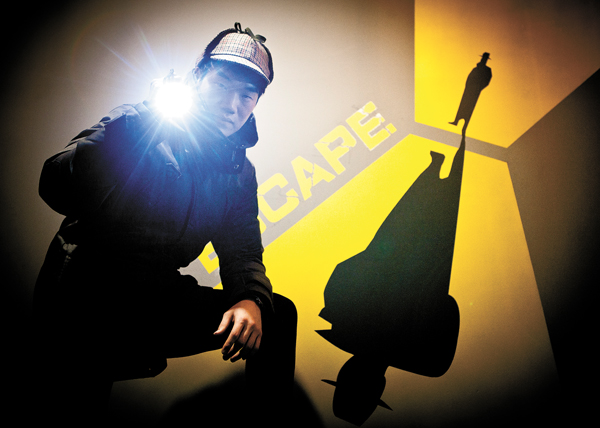 Where is the fun in being trapped in a mysterious room, especially if it costs money? What raises eyebrows even more is that there are people lining up to wait their turn.

The hottest shows on TV these days involve deductive investigation: tvN’s “Signal” and “Cheese in the Trap” and JTBC’s “Code - Secret Room,” as well as recent episodes of the MBC entertainment program “Infinite Challenge,” all incorporated this theme. The theme also spilled over into real-life trends, with so-called escape rooms opening across the country as a new breed of entertainment that incorporates deductive reasoning.

At escape rooms, customers must find clues and solve puzzles to find their way out of a room within a given amount of time, usually an hour. Since the first escape room launched in Seoul last May, the number of these businesses has increased to 50 nationwide. The head of Key Escape in Daehangno, central Seoul, says it is sought after by virtually all age groups. Not only young couples bored out with the mundane dating routine, but parents with kids and groups of coworkers enjoy playing the game. To play on weekends, customers have to make reservations as early as two weeks in advance.

The online community of deduction enthusiasts is also experiencing the heavy surge in membership. One deductive investigation online community group that started in 2006 now has 28,000 members, of which roughly 5,000 joined only recently. “Psychologically, people are naturally intrigued by problem solving,” explained Jeon Woo-yeong, a psychology professor at Chungnam National University. “More so if the stage embodies the settings of detective stories or criminal movies.” 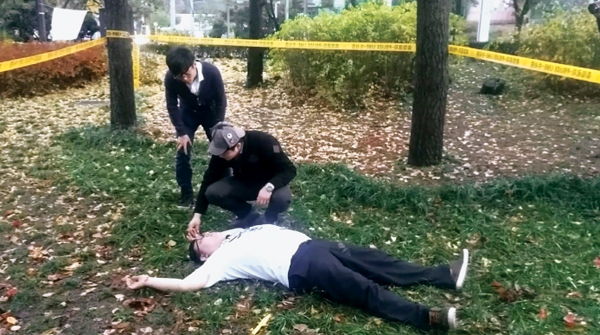 Lee Jung-ho, center, the head of a deductive reasoning society, investigates a mockup


The room is locked and dark. The reporter and Lee Se-woong, a 27-year-old student, must find clues and unlock the safe in a North Korean spy-themed room within an hour. If the time runs out before they solve the puzzle, the room will be unlocked from the outside. The two detectives started ransacking every corner of the room in search of clues. With the ticking sound of the clock making their hearts pound, the pair tried to decode enigmatic symbols.

The puzzle pieces were gradually coming together but they could see nothing tangible yet. When the answer seemed to come from out of nowhere both men couldn’t help but break out in cheers. With 20 minutes to spare, Lee punched in the combination to the safe. “It just felt like I was in a whole different world, with my phone out of my hand facing all those questions,” he gushed. “You get to experience a strong sense of achievement, and that just wipes out all your stress.”

Mathematics instructor Noh Young-wook is a huge fan of escape rooms who has been visiting such places across the country and posting reviews of them on the Internet. “I have started trying them since the first room opened and made it out of 30 rooms so far,” Noh said. “Once I even made it within 18 minutes.”

The aficionado even designed the eight secret rooms at the request of different business owners. His rooms were designed based on true prison break cases to elevate the sense of reality.

“One of the rooms is modeled after a jailbreak happened at Alcatraz prison in the United States, which was known for never having any escapes,” Noh said. “As opposed to the past when whole deductive reasoning thing was seen as a game for game junkies, now with more exposure to the public the stereotype has changed.”

The math instructor, who is also an administrator of the popular Internet cafe RS Deductive Reasoning Laboratory, offers many quizzes on the website with which members can test themselves. Members are given four levels with C being the lowest and S being the highest based on the test results. The deductive capability required to get level S is extremely high, so only 15 of 28,000 members are at level S.

For the two offline gatherings the club hosts annually, members have to figure out the rendezvous point on their own through deduction just to participate. And for one of the meetings, a clue was inserted into one of the released videos using Morse code. Noh says deductive reasoning starts from having an outside-the-box mentality and taking a different approach.


For some, deduction is more than just entertainment. These people are digging into real mysteries that remain unsolved. Interior designer Lee Jung-ho leads a deductive reasoning society that analyzes unsolved criminal cases. The Hwaseong serial murder case from 1986, which eluded police and was eventually left unsolved as its statute of limitations expired in 2006, is among the more notable cases.

“The more the word gets out about these criminal cases, the more likely they will be solved,” Lee said. “What breeds a perfect crime is nonchalance after all, so we try to deal with more unsolved cases.”

Another case that drew Lee’s attention is that of the Lee Yun-hui, a 29-year-old veterinary science student at Chonbuk National University who went missing in 2006. The deductive reasoning expert had gathered pieces of evidence and actually reported them to the assigned police officers in hopes of helping solve the mystery. “It is just a shame to see no progress for a past decade.”

But while he may not have helped solve a real crime, Lee says his skills are useful in everyday life. He described a recent turn of events involving a parked car blocking his car’s way.

“I began the deductive process with snooping. After careful observation of the car, what caught my eye was a pack of cigarettes inside the car, which led me to assume the owner customarily smokes in front of his house. I looked around the apartments and found a discarded cigarette butt that was the same kind as the ones in the car. Then I started from the first floor of the nearest apartment and moved my way up, and in no time I was magically led to the car owner. See? It can’t hurt to have some deduction skills.”

But Lee’s deduction skills don’t stop there. Wanting to be a professional private detective, he was even a part-timer at a detective agency for nearly two years. However, Korean law prohibits private detectives. Although a new law allowing private detectives was proposed in 1999, it has not been passed by the legislature due to privacy concerns.

“Among OECD countries, Korea is the only country that hasn’t legalized private detectives,” Lee lamented. “Since the negative perception toward them has been corrected, the country should incorporate systematic support in this field such as job training.”

Ha Jae-geun, a cultural critic, points to the pervasiveness of hands-on entertainment as one of the reasons for the recent popularity of deductive investigation.

“Those in their 20s and 30s have grown up playing video games, consequently exposing themselves to all kinds of excitement,” Ha said. “Unlike the past when such deductive activities were only witnessed from a distance either in movies or on TV, now it has become more of, ‘Oh, I’d like to try it as well’.”