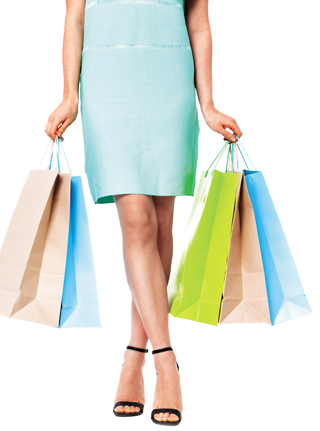 Several members of the Songpa Jamsil Tourism Organization stood solemnly at the entrance of the latest public hearing regarding regulation changes to the nation’s duty-free industry.

They held up banners demanding the government re-license Lotte’s duty-free business at the company’s mall in Jamsil, southeastern Seoul, so that the local economy could benefit from tourists visiting the area.

Tensions ran high during the debate held at the Public Procurement Service’s office in Gangnam District, southern Seoul, on Wednesday, though there were no physical altercations.

“The 2,200 people - 1,300 at [Lotte] World Tower and 900 at [SK] Walkerhill - will lose their jobs, and 95 percent of those workers are women,” said Moon Geun-sook, head of Lotte Duty Free’s labor union. “We would like to work in an environment where our jobs are secure.”

Soon, an official from one of the duty-free operators awarded a license last year stood and questioned the hearing itself.

“I don’t understand why this public hearing is taking place today,” the official said. “It seems as if we’re already moving toward reissuing a license to Lotte.”

The host of the hearing denied such claims.

The Wednesday confrontation was the most recent development in the ongoing controversy within the duty-free industry.

The possibility of another license being given out has become the most contentious issue. It’s been less than a year since Hanwha Group, Doosan and Shinsegae were given licenses allowing them to grab a piece of the rapidly growing duty-free industry in Korea. At the same time, Lotte and SK Group were stripped of their licenses.

But the market is already betting that the government will renew the licenses it took away.

In particular, the report by the Korea Institute for International Economic Policy (KIEP), commissioned by the government and released Tuesday, raised the possibility that Lotte could regain its license to operate a duty-free shop in the World Tower in Jamsil, which reopened in late 2014 after receiving over 300 billion won ($250 million) in investment.

In the report, the KIEP noted the need for additional operators to meet growing demand from tourists. 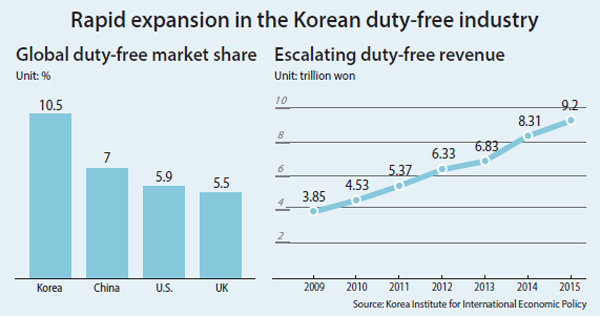 The number of foreigners that have visited the stores increased 128 percent during the same period, from 2.45 million to 5.59 million.

The report suggested that in order to secure sustainable growth in the duty-free industry and contribute to vitalization of the tourism industry, the government should provide additional licenses.

The five new operators named since July held an emergency meeting on Monday, two days before the public hearing where they opposed the ostensible steps toward additional licenses being awarded.

“They should have at least waited until new duty-free stores were open,” said Kwon Hee-seok, CEO of SM, at the press briefing held on Monday at the Bankers’ Club in Myeong-dong, central Seoul. “If the government continuously adds new operators, the duty-free stores there will see side effects, such as the selling of fabricated products or gray import goods in the mix, as there will not be a proper, secure distribution channel.

“The overall duty-free business in Korea could crash.”

Hwang Yong-deuk, CEO of Hanwha’s Galleria, said hurting the new duty-free operators could have wider-ranging effects than were seen after Lotte and SK lost their licenses.

“Lotte World Tower and SK Walkerhill had invested a total 40 billion won and were employing 2,200 people, whereas the newly named duty-free investors put up more than 1 trillion won and hired over 14,200 people,” Hwang said. “The newly licensed operators are also selling more products made by small and midsize companies. If we fail, the SMEs will also suffer.”

Some industry insiders have raised concerns over the inconsistencies and confusion created by the government.

“I think there’s a problem in the timing [of the government announcement],” said an industry official who requested anonymity. “Wouldn’t it be better if the government issued the additional licenses after the new players from November have settled in first?

“If the regulation changes, the new operators have to change our strategies, meaning additional costs.”

On the other side, though, Lotte Group has been closely monitoring the government’s moves with high hopes.

The duty-free business in Korea has been considered a golden goose for the nation, as revenue has grown rapidly in recent years.

According to the KIEP report based on studies by the Moodie Report and Generation Research, the global duty-free market in 2014 was worth 66.8 trillion won. Korea held the top market share with 10.5 percent, more than other major countries including China (7 percent) and the United States (5.9 percent).