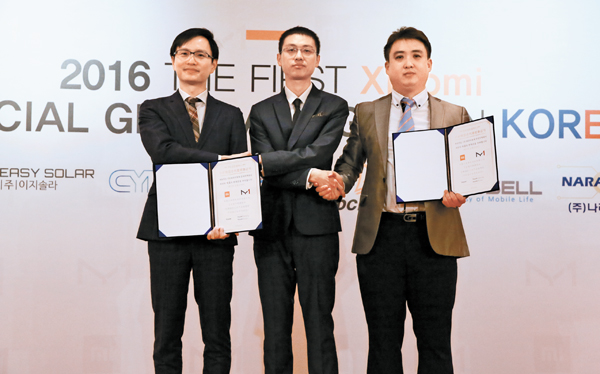 Xiaomi users based in Korea will soon be able to get their devices repaired and purchase a wider range of products at physical stores, as the Chinese tech giant has formally entered the Korean market with an agreement with local partners.

Xiaomi has maintained a somewhat modest presence in Korea through a handful of partnerships with e-commerce sites and retailers, but it said Wednesday that the growing popularity of Xiaomi products prompted the company to take further steps to serve Korean customers.

“Xiaomi learned that we have many fans in Korea,” said Ju Xiaowei, overseas project manager at Xiaomi’s Eco department, “so we hope that Korean consumers will have more products available and better services. This is why we signed the contracts with local partners.”

He attended a ceremony on Wednesday for the signing of an agency agreement with Youmi, one of the two authorized Korean dealers selected by the company, after the two parties struck the contract on March 2.

Youmi said that it will reach out to more consumers in the country by establishing “experience zones” in 260 stores in 17 cities where people can demo and purchase products, though it didn’t offer specifics about the stores. The company said it will also open brick-and-mortar repair centers.

“As the official and first agent of Xiaomi, we will be responsible for selling Xiaomi products and providing repair services,” said Lee Seoung-hwan, CEO of Youmi.

But the latest agreement did not include smartphones, which disappointed some consumers who were looking forward to Xiaomi’s famously low-cost, high-performance devices.

Instead, products covered include battery packs, headphones, the fitness-tracking Mi Band and the Ninebot, its small scooter resembling the Segway, as well as a portable USB fan and lighting devices.

Smaller smartphone accessories such as portable battery chargers will be distributed to some 40,000 cellphone stores across the country, according to Youmi.

The other local partner is Koma Trade, a distribution and trading company that also signed an agreement earlier this month.

The two companies are lesser-known small companies whose core business has become providing services for Xiaomi.

Ju said that Xiaomi selected the two companies since they can devote all their energy to the Chinese tech giant.

“Some 30 companies approached Xiaomi when we said we needed a local partner,” Ju said. “There were Korean conglomerates that everybody would know, but we decided to go for these smaller companies because their resources and focus wouldn’t be spread across different businesses and projects”