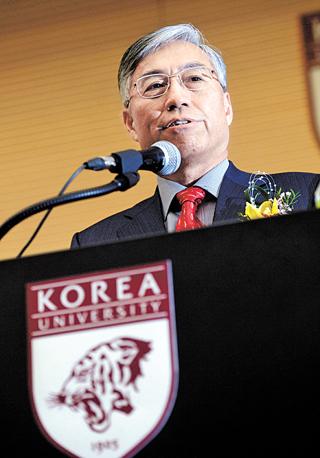 In a special lecture at Korea University on Wednesday, Chinese Ambassador to South Korea Qiu Guohong said that North Korea “must pay the price” for conducting its fourth nuclear test.[NEWSIS]

China has instructed its companies that trade with North Korea to stop importing coal, one feature of the United Nations Security Council sanctions passed earlier this month.

“All member states are obligated to strictly enforce the Security Council resolutions,” said Chinese Foreign Ministry spokesperson Lu Kang in a press briefing Tuesday when asked by a reporter whether Beijing has cracked down on small and medium-sized companies involved with the coal and energy businesses with North Korea.

“The Chinese side follows the procedures of domestic laws and regulations,” Lu said, “and timely informs relevant entities and enterprises and ensures that they strictly follow the notices.”

There have been previous unconfirmed media reports that Chinese authorities since the beginning of March had informed local governments in its northeastern regions bordering North Korea to have companies and intermediaries halt coal imports from North Korea.

The ministry spokesman’s reply is considered Beijing’s confirmation of those reports and an indication that it is implementing the UN sanctions on Pyongyang.

Through every step of the negotiation process that led to the unanimous adoption of United Nations Security Council Resolution 2270 on March 2, China’s cooperation was considered key to getting strong enough sanctions to prevent a fifth nuclear test by Pyongyang.

The resolution is considered the toughest international attempt so far to curb Pyongyang’s financing of its weapons of mass destruction programs, enabling secondary boycotts and banning North Korea’s exports of coal, iron, gold, titanium and other rare earth minerals being used to fund its nuclear and ballistic missile programs.

For the first time, all cargo going in and out of North Korea is subject to mandatory inspection, and Chinese authorities have been turning away North Korean cargo vessels blacklisted by Beijing’s Ministry of Transport. North Korea’s cargo ship Grand Karo, one of 31 vessels blacklisted by the Transport Ministry, was turned away from Rizhao port in Shandong province, northeastern China, a Korean government official confirmed Wednesday.

U.S. Treasury Secretary Jack Lew said Tuesday at a House Appropriations Committee hearing that China has “indicated an intention to implement” the sanctions and that such support from Beijing is “a very significant development.”

He added, “I can tell you that they don’t view this as something they’re doing for us,” and that high-level Chinese officials he met since the resolution passed have “indicated a high level of concern” over what is happening in North Korea.

Russian energy firm Gazprom announced Monday that it had halted cooperation with North Korea, also in response to the Security Council resolution, according to Russian media.

The company was reported to have said that it has no transactions with any Iranian or North Korean companies because of its concern that this would limit its access to the international capital market if it violates the UN Security Council resolution.

But Japan’s Sankei Shimbun reported Wednesday that North Korea has been smuggling in Russian Mazut M100 fuel oil through a Chinese company.

This lower-quality M100 fuel, which costs about a third of crude oil, can be refined into aviation fuel.

Such methods of smuggling are causing concern that there is a loophole in the resolution, under which countries are generally banned from supplying aviation fuel to the North.

In a special lecture at Korea University on Wednesday, Chinese Ambassador to South Korea Qiu Guohong said that North Korea “must pay the price” for conducting its fourth nuclear test on Jan. 6.