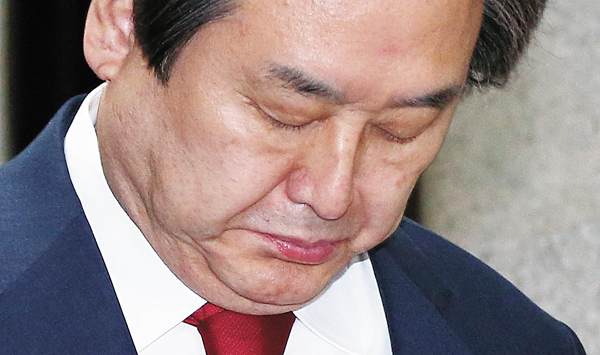 Kim Moo-sung, chairman of the ruling Saenuri Party, walks into the closed-door Supreme Council meeting to discuss the fate of Rep. Yoo Seong-min at the National Assembly on Wednesday. [KIM KYUNG-BIN]

The ruling Saenuri Party’s chairman on Wednesday publicly challenged the nomination committee’s decision to deny candidacies to key opponents of President Park Geun-hye, amid growing skepticism of the integrity of the selection process for candidates for next month’s legislative election.

Chairman Kim Moo-sung held a press conference at the National Assembly yesterday afternoon and said the Supreme Council, the highest leadership body of the Saenuri Party, was withholding approvals of seven nominations proposed by the nomination committee.

Kim also said the Supreme Council is asking the committee to reconsider its nomination of a woman candidate to run in Suseong B District in Daegu, currently occupied by Rep. Joo Ho-young, who desires to run.

The nomination committee, chaired by Rep. Lee Han-koo, a key Park loyalist, reviewed applications from potential candidates over the past week and made a series of announcements. As of Wednesday evening, the committee announced the nominations for almost all districts, and many Park adversaries failed to win tickets.

“The Supreme Council is withholding approvals of a total of eight nominations, first because they violate the party’s constitution and regulations,” Kim said. “Second, they were strategic selections that went against the principle of public nomination.”

“Strategic selections” is code in Korean politics for handpicking candidates instead of going through a public process like a primary or through public opinion polls.

Kim said it was unacceptable that the committee denied some sitting lawmakers the chance to win a nomination in a primary. Although Kim said he wouldn’t name all seven districts that the Supreme Council deemed problematic, he criticized the committee’s denial of a candidacy for Rep. Lee Jae-oh, a five-term lawmaker and fierce critic of President Park.

“Although [the committee] said his identity doesn’t match that of the party, Lee served as the party’s floor leader twice and worked as a minister during a Saenuri presidency,” Kim said. “He was a fighter against the Kim Dae-jung and Roh Moo-hyun administrations. We nominated him five times already, and it is hard to understand why he is unfit.”

Kim also said the leadership asked the committee to reconsider its decision to deny Rep. Joo Ho-young a chance to be re-elected on a Saenuri ticket. Kim said Joo had many accomplishments, including reform of the public pension scheme and passage of a counterterrorism bill. Joo is currently serving as chairman of the National Intelligence Committee.

Kim questioned the transparency of some primaries that were held for some constituencies, saying front-runners in opinion polls failed to win nominations in some areas. Despite Kim’s press conference, Lee, the chairman of the nomination committee, flatly rejected the challenge.

“The nominations were unanimously decided by the committee, and there is no reason to reconsider,” Lee said.

Of the 253 electoral districts nationwide, the party has announced candidates or scheduled primaries among narrowed-down contenders for 250 districts.

Of the remaining three constituencies, two are located in Gwangju, where the ruling party rarely fields candidates due to its extremely low popularity. The last remaining district is Daegu Dong B District, currently occupied by Rep. Yoo Seong-min, also a known rival of President Park.

Nomination Committee Chairman Lee said earlier in the morning that the decision on Yoo’s fate is being delayed because a “political judgement is needed.” He also said the committee members were split and asked the Supreme Council to deliberate the issue, although the leadership’s opinion is not binding.

Yoo, a three-term lawmaker and former floor leader of the ruling party, was once an ally of Park, though the two parted bitterly last year after she publicly condemned him for “politics of betrayal.” Park loyalists have consistently argued that Yoo and his associates have a different philosophy and political identity from the Saenuri Party.

While Yoo’s fate remains up in the air, an analysis into the political affiliations of 143 candidates who won Saenuri tickets showed that Park loyalists prevailed.

A JoongAng Ilbo analysis based on party officials’ evaluations showed that 85 of the 143 nominees are considered Park loyalists. Eighteen were technocrats without political affiliations, while the rest were Park critics.

Of the 143, 63 were incumbent lawmakers and 33 were Park loyalists.

The exclusion of Park adversaries comes with a risk because many will run as independents. Yim Tae-hee, former chief of staff during the Lee Myung-bak administration and former three-term lawmaker, left the party on Wednesday to run as an independent.

“I believe an alliance of independents who were former Saenuri members is possible,” he said.