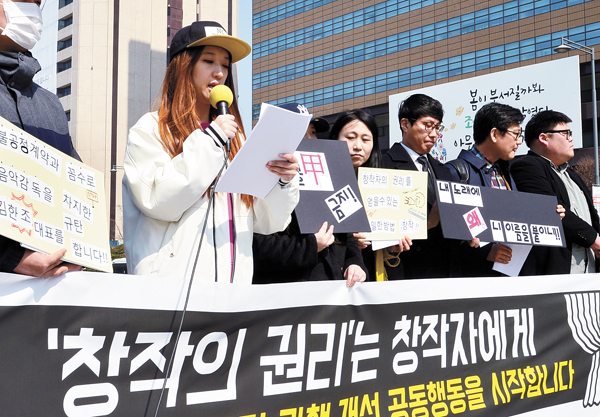 Arts and culture professionals rallied in Gwanghwamun Square on Wednesday to protest what they said were unfair contracts handed out by Korea’s production companies.

Among the dozens of people who gathered in central Seoul was Kim In-young, a soundtrack composer, whose works include songs for tvN’s popular “Reply” series.

The 35-year-old added that she had been paid a mere 9 won ($0.007) for the year she worked with Roy Entertainment, a music library company.

“I composed hundreds of soundtracks for TV series and movies, but the production companies stripped me of my copyright and forced me to become a ghostwriter,” Kim said. “The past five years have been filled with exploitation and made my life hell.”

For the first year and half after signing with Roy Entertainment in 2011, she said, she composed movie and TV songs unpaid. Total royalties she received in August 2012 amounted to just 9 won.

Another production company she started working with in 2013, for which she composed 53 drama soundtracks, also demanded that she hand over her rights to the songs, she said.

“There are many artists out there who will gladly make music for us in your stead,” Kim quoted the company as telling her at the time, adding that she then lived on a monthly wage of 800,000 - barely above the minimum monthly wage in 2013 of 4,860 won an hour.

Her pay was later raised to 1.3 million won in 2015, though the company’s directors demanded the permanent transferal of copyright from its composers, she said.

According to recent data, Kim is not alone.

When the Ministry of Culture, Sports and Tourism surveyed 5,008 people in the arts last year, it found that 69.3 percent had signed unfair contracts with production companies. And of them, 12.2 percent said their copyright and royalty privileges had been taken away. Those numbers also reflect the reality for actors, media artists and stage or exhibition workers.

Song added that actors hired for minor roles are not insured and are forced to pay out of pocket in the event that they are injured.

Media artist and stage installation worker, Kim Chang-gyeom, also spoke out about his experiences with unfair pay - once while working for the 2012 Daegu Photo Beinnale and again for the Gaeksa Museum opening in 2014.

Exhibitions organized by public institutions often fail to account for installation costs in their budget, he said. “These institutions don’t appreciate the artists’ passion and effort,” he added. “It seems no matter how much I work, I’m always broke.”