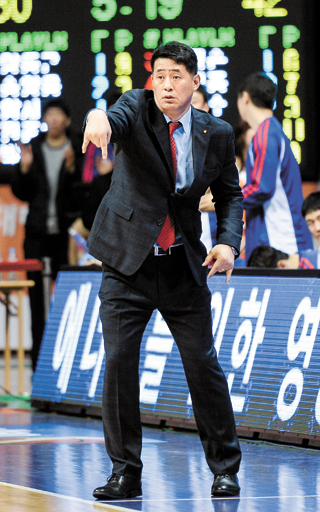 Ulsan Mobis Phobues coach Yoo Jae-hak is probably at the top of most fans’ list as the best strategist in the Korean Basketball League (KBL). However, his hope for four straight championship titles has been destroyed by yet another brilliant strategist, Goyang Orion Orions head coach Choo Il-seung.

The Orions caught everyone by surprise in the KBL semi-finals when they shut down the defending champions by winning the first three games of the series to send the Phoebus home. The Orions also came out of the quarterfinals against Wonju Dongbu Promy with the same result. They captured six wins without a single loss in the KBL playoffs this year.

The Orions hope to continue the momentum into the finals against Andre Emmett’s Jeonju KCC Egis, which, if successful, will be the club’s first KBL championship title in 14 years.

While even some Orions staffers predicted that the semi-final series would go as far as the fifth game, Choo managed to subvert the prediction.

The Orions could not take advantage of its strong offense that piled in 81.2 points on average during the regular season, as it only averaged 65.6 points per game against the Phoebus in the semi-finals. However, the Orion defense came alive to rescue the offensively distraught team and overpower Yoo’s Phoebus.

The plan behind defeating the Phoebus was to sever Phoebus’ offense by having their ace guard Yang Dong-geun in check. “Our game plan was to contain Yang even if we give points under the basket,” said Choo. “Yang is the starting point of Phoebus’ attack. Our logic was that if we stop Yang from getting to the ball, it would disorient their offense.” Choo’s strategy paid off and the Orions held off Yang with an average of 10.6 points per game.

On top of his brilliant game plan, Choo’s desperation to edge his old teammate Yoo played a vital role in knocking out the Phoebus. Yoo and Choo played together for Busan KIA Enterprise in the late 80’s. “I know Yoo’s style of basketball,” said Choo. “So I was able to somewhat guess what his game plans were going to be and my predictions were often correct.”

But Choo is more than a strategist. He is also a hidden talent in the KBL as well as a scholar. Not only did he translate ‘Winning Defense,’ a book written by former NBA coach Del Harris, but Choo also earned his PhD at Dongshin University with a dissertation related to marketing in the KBL in 2009.

Choo is also well known for his ability to select foreign players. He takes keen interest in the seniors in U.S. college basketball and travels to Europe to search for possible team candidates.

Joe Jackson, who drained a free throw with five seconds remaining in the first game of the semi-final series to lift the Orions over the Phoebus, is a player Choo has had his eye on since he played for the University of Memphis. This season’s leading scorer Troy Gillenwater of Changwon LG Sakers was also Choo’s selection.

Choo started his career late when he was a junior in high school. He joined the sport simply because of his height. He played as a founding member of Hongik University basketball team but the team never put out any memorable performance in the university league.

After graduating in 1986, Choo started to play for the Enterprise, only to warm the bench overshadowed by Han Ki-bum, the old Korean national basketball team player standing at 2.07 meters (6 foot 9). Choo retired from the sport after three years and worked for KIA motors as a regular employee. In 1991, he took a staff position for the Enterprise. “I had to buy players’ snacks and had to stand night watch often to keep players from going AWOL. I think I slept about three hours a day back then,” said Choo. Never in the basketball mainstream, Choo says his favorite song is “My Way” by Frank Sinatra.

Choo finally began his career as a coach in 1997, when he took a coaching post for Korea Armed Forces Athletic Corps basketball team. After leading the team in 2002 to win the Jumbo Series - the top level for basketball in the country organized by the Korea Basketball Association that featured teams from colleges and companies before the KBL started in 1997 - Choo went on to take over Busan Korea Tender Maxten, the predecessor of Busan KT Sonicboom in 2003.

Choo joined the Orions in 2011 who had been struggling at the bottom of the league for the past four seasons. Only one year after his management, the underdog Orions went to the playoffs in 2012 and has made its appearance in the semi-finals for the past four years since then.

“I had to change players’ mentality to instill the mindset of winners,” said Choo. “So I trained them at midnight after each game.”

When asked about his coaching philosophy, Choo replied, “To survive as a coach, I have to have a coherent coaching principle. Mine is that basketball is a team sport, not a game played by one or two players.”