Nat’l team star finds a new home in the booth

Nat’l team star finds a new home in the booth 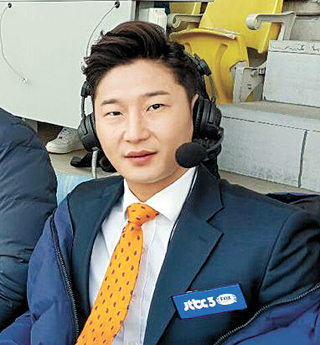 Former national team striker Lee Chun-soo in his new role as a commentator for the K-League. [PI JOO-YOUNG]

It was clear that former national football team striker Lee Chun-soo was in his element during his debut as a sports commentator.

“It’s a different feeling commentating compared to playing out in the field,” said an excited Lee during the match. “It’s fascinating.”

Lee’s first time in the broadcasting booth was March 12, when he covered the K-League Classic opening match between Seongnam FC and Suwon Samsung Bluewings for JTBC3 FOX Sports.

He took off his jersey after last season with Incheon United FC, but the player known for his wit and ability to banter couldn’t bring himself to leave the stadium just yet. Based on his recent performance, that’s a good thing for Korean football fans.

After making predictions and sharing anecdotes for nearly all 90 minutes of the match, Lee’s voice was nearly gone.

“I think I did as well as I had hoped before the game,” croaked Lee. “I designated Kim Do-heon as a key player of the match and shared that we go to the same barbershop. I think I had some colorful things to add like that.”

But even without a voice, there was no sign of exhaustion in his face.

“I felt like I was representing the players running out in the field,” said Lee. “It was a pleasant experience.”

What makes Lee a good commentator is his depth of experience.

Lee joined Ulsan Hyundai FC after graduating from Korea University in 2002 and left distinct mark in the club as well as on South Korean football. He was a part of the national team during South Korea’s historic journey to the World Cup semi-finals in 2002. In the next World Cup in 2006 in Germany, Lee led the national team with phenomenal plays, including his goal off a free kick against Togo. He also climbed to the top in Asia when he led his old club in Ulsan to win Asian Champions League in 2005 with a hat trick in the finals. He has played for numerous clubs in leagues overseas, including Real Sociedad of Spain, Feyenoord Rotterdam of Netherlands and Al-Nassr of Saudi Arabia. His record in the K-League stands at 179 match appearances, with 46 goals and 25 assists. On the international stage, he played in 78 matches and scored ten goals.

Lee is definitely aware of his advantages as a commentator.

“I might not be able to explain everything perfectly like a veteran for a while,” said Lee. “But, I know the players in the League right now and I know the game well. In that sense, I can deliver feedback to the crowd that’s more vivid and fresher.”

After the match, Lee received lots of attention from fans, some of whom asked for pictures or made a point to congratulate him on his new role.

But while Lee may have found his second calling, some aspects of the job came as a surprise.

“I never knew the booth was so cold,” laughed Lee afterwards. “It always looked really warm from the field.”