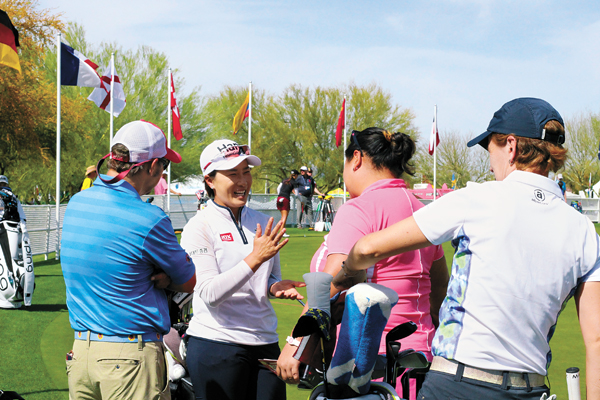 Pak Se-ri (second left) prepares for the JTBC Founders Cup which starts today in Phoenix, Arizona. Park, who inspired Korea during its tough economic crisis in the late 90’s, says she will retire from the sport after this season. [LEE JI-YEON]

National golfing hero Pak Se-ri plans to retire at the end of this season.

But she is looking forward to beginning the season at the Ladies Pro Golf Association (LPGA) JTBC Founders Cup, which begins today at Wildfire Golf Club at the JW Marriott Phoenix Desert Ridge Resort & Spa in Phoenix, Arizona.

When asked about her determination going into the event, Pak said, “I have played this sport for nearly 20 years. In retrospect, although there were some distressing moments, I was happy. I would like to play in this tournament while leaving no regrets behind. I have received so much love from my fans and now I would like to return the favor as much as possible before I leave.”

Pak has been struggling with incessant injuries including recurrent dislocation of her shoulder. Despite her injury, she has trained hard over the winter to prepare for this season.

Pak practiced a few days ahead of the Cup. “That was my first time to go through the entire round,” she said. “It was not as exhausting as I expected. I felt at home stepping on the grass. I am still working on my putting but I’m just grateful that I am able to swing my club.” It is Pak’s first appearance in the LPGA tour since June 2015 when she competed in KPMG Women’s PGA Championship.

Pak also plans to participate in the ANA Inspiration, one of the major championships of professional women’s golf, that takes place from Mar. 28 to Apr. 2. If she wins the event, she will complete a “Career Grand Slam,” an honor given to the golfers that win four different majors. Pak already has a KPMG Women’s PGA Championship title, a U.S. Women’s Open title and a Women’s British Open title on her shelf.

Pak rose to stardom in 1998 when she inspired the entire nation of Korea that was struggling from 1997 Asian Financial Crisis with her performance in the US Women’s Open at Blackwolf Run in Kohler, Wisconsin. Pak took off her shoes and socks to hit a ball on the edge of a water hazard and went on to achieve what was considered impossible; a Korean golfer winning a major U.S. event.

Many top-ranked golfers will make an appearance at today’s tournament. Of the top 10 in the Rolex rankings, only No. 3 Lexi Thompson and No. 8 Chun In-gee will be absent. Chun had an accident two weeks ago in Singapore and will be sidelined from the event to recover from a back injury.

Defending champion, world No. 12 Kim Hyo-joo will take a shot at her second consecutive title in Phoenix. Jang Ha-na, who’s had a sizzling start this season with two wins already under her belt, including the HSBC Women’s Championship in Singapore on Mar. 6, will attempt to grab her third victory of the season at the event. 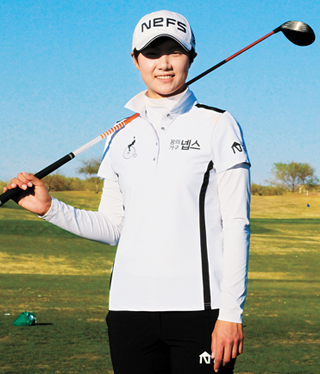 
The JTBC Founders Cup also marks the first LPGA tournament in the United States for Korea’s Park Sung-hyun. She has already left an impressive mark in the LPGA event that took place in Korea last year. Park tied for second place in the LPGA KEB-Hana Bank Championship in Incheon in Oct. 2015, only one shot behind Thompson who carded the win 15-under 273.

For Park, the JTBC Founders Cup will test her ability to join the LPGA. She clinched three wins last season in the Korean LPGA (KLPGA) and is joining the Founders Cup with an invitation. “I became confident after finishing second in the LPGA KEB-Hana Bank Championship last year,” she said. “My goal is to join the LPGA within next two years. It is a little nerve wracking to think that the Founders Club is the first test event.”

The current sponsor of the tournament is JTBC, a South Korean nationwide general cable TV network and broadcasting company.