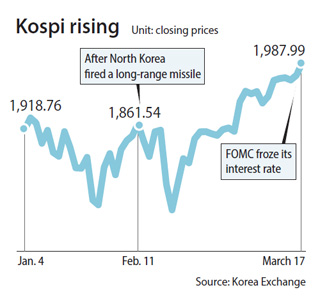 The U.S. Federal Reserve’s decision to freeze its key rate at the current 0.25 to 0.50 percent on Wednesday is expected to have a positive impact on the Korean market, giving the Bank of Korea (BOK) more time to consider the right timing for a rate cut, possibly after June.

Thanks to Fed Chair Janet Yellen’s remarks that suggested slow rises in the U.S. interest rate, significant uncertainties in the Korean financial markets have been removed, helping the benchmark Kospi rally to a year high.

Seoul’s main bourse hit the 2,000 mark at 12:43 p.m. Thursday after it opened higher in the morning on overnight news of the rate freeze in the United States. It is the first time in three months the Korean stock index reached that significant psychological threshold.

“The Federal Open Market Committee decision was made in a market-friendly manner,” said Park Hyung-joong, a research fellow at Daishin Securities. “The most likely month for a U.S. interest rate hike is expected to be June, and investors would prefer risky assets until then.”

Foreign investors purchased more than 400 billion won ($344 million) worth of local shares, contributing to the upbeat atmosphere in the market. They have been on a buying spree for six days in a row as of Thursday.

Market researchers forecast the Kospi rally to continue for the time being, considering such favorable conditions in the world economy as gradual U.S. rate hikes and oil price increases, which have become signals of global economic strength.

“Risks from the monetary policy changes will be eased,” said Park So-yeon, senior research fellow at Korea Investment & Securities. “The Kospi is projected to rise up to 2,020 by June.”

The Korean won also appreciated against the U.S. greenback, marking its highest value of 1,173.3 won on Thursday.

“Owing to the gradual normalization of U.S. monetary policy, the dollar is starting to weaken,” said Ha Kun-hyung, an economist at Shinhan Investment Corporation. “Expectations on an agreement by OPEC members to freeze output are also putting more weight on the weakening dollar.”

Rebounds in oil prices from $20 per barrel to $30 are adding to the favorable mood in the market.

Along with positive signs in the global economy, the BOK has earned more time to mull its next decision on Korea’s monetary policy.

Asked why the BOK was not taking pre-emptive action like the Bank of Japan’s introduction of a negative interest rate, Lee kept cautious.

“We are watching closely changes in other central banks’ decisions because they affect our domestic economy and finances,” he said. “And we are taking the changes into account when making a monetary decision.”

Four out of seven members of the BOK’s monetary policy committee will be replaced in April. Because of such crucial change, market observers say the likelihood of a rate cut is very low next month.

“Given the member replacement plan and the high possibility of a U.S. rate hike in June, it won’t be easy for the BOK to adjust the interest rate in April or May,” Kim Soo-jeong, a research fellow at Hana Institute of Finance, said in a report. “Considering about 7.4 trillion won worth of won-denominated bonds owned by foreigners are going to reach maturity in June, worries about capital outflows could be raised again in the market.”

Due to weak economic indicators including an all-time high youth unemployment rate, double-digit falls in exports, worsened consumer sentiment and companies’ hesitance to make new investments, the Korean economy is in need of further loosening of monetary policy, analysts say.