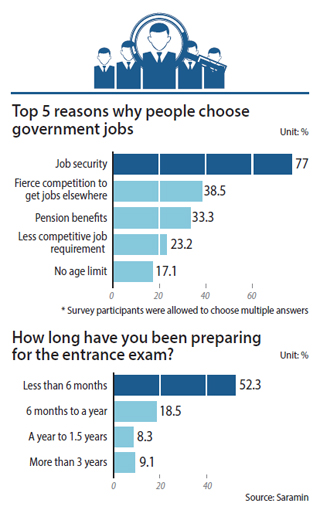 As it becomes increasingly difficult to land stable positions elsewhere, young Koreans are chasing government jobs in growing numbers, according to a recent report.

Eight out of ten job seekers are currently interested in applying for government jobs for reasons such as job security and pension benefits upon retirement, representatives at the job employment portal Saramin said Thursday.

A total of 77 percent of respondents said they want government jobs since these offer relatively stable working conditions, while 38.5 percent said they are seeking government jobs because equally attractive alternatives are scarce.

Some 23 percent thought job requirements are relatively less strict, and 17.1 percent said they like that government jobs have no legal age limit for applicants.

Meanwhile, the number of applicants seeking entry-level government jobs this year rose to 223,000, a 30,000 increase over last year, according to the Statistics Korea jobs report, released Wednesday. Unfortunately, only 1.85 percent of applicants, or 4,120 people, will be able to secure job offers this year.

Furthermore, the unemployment rate for Koreans aged 15 to 29 reached an all-time record of 12.5 percent in February.