Jeju hosts its third int’l expo on future of EVs

Jeju hosts its third int’l expo on future of EVs 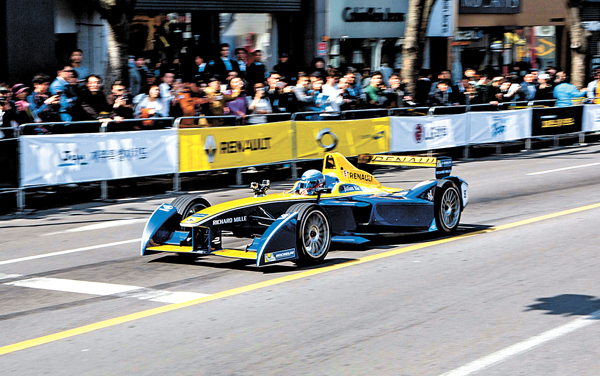 A Renault racing car powered by an electric motor shows its stuff Thursday on the eve of the 3rd International Electric Vehicle Expo on Jeju Island. [RENAULT SAMSUNG MOTORS]

An exhibition on the current state of electric vehicles (EV) and their future kicks off today on Jeju Island.

The International Electric Vehicle Expo (IEVE) will be held from today to March 24, with 145 automakers and parts makers participating, as well as other businesses related to the industry. The event is Jeju’s third, and automaker Hyundai Motor will unveil an EV model of its environmentally friendly Ioniq car for the first time. Other automakers, including Kia Motors, Renault Samsung Motors, GM Korea, Nissan and BMW, will also introduce EVs to visitors.

At the IEVE, 25 electric vehicle associations from 11 nations and private businesses will discuss issues like how the world will standardize charging styles. Representatives of local governments around the world trying to replace gas-powered cars with EVs, including Jeju Gov. Won Hee-ryong, will discuss the challenges ahead.

The highlight of the expo will be eye-catching EVs, although Hyundai’s Ioniq EV is the only car that will be launched at the event. The automaker said the model can travel 169 kilometers (105 miles) on a full charge, which is longer than Renault Samsung Motors’ SM3 Z.E (135 kilometers) and Kia Motors’ Soul EV (148 kilometers).

Hyundai hopes to sell 4,000 units of EVs, including the Ioniq, this year, which is about 50 percent of the nation’s entire domestic EV sales. The company will start selling the Ioniq EV in June.

German automaker BMW will show the i3, its popular EV, while Japan’s Nissan will show off the Leaf, which is the best-selling EV in the world with a sales record of 210,000 units globally since it came out on the market in December 2010.

EV battery makers LG Chem and Samsung SDI will also take part in the expo to show their batteries and charging systems. Business leaders in the industry including Yang Woong-chul, vice chairman of Hyundai Motor, who is in charge of its research and development, and Environment Minister Yoon Seong-kyu will be at the opening ceremony.

The Ministry of Environment plans subsidies on 8,000 EVs, and 4,000 of them will be given to EVs in Jeju, a region that is trying to adopt environmentally friendly cars to protect the environment on the island, which is one of the most popular tourist attractions in Korea.

A series of events to attract visitors are being held. Renault Samsung said it held a Formula E road show on Thursday. In the event, the automaker showed off a racing car powered by an electric motor that is capable of a maximum speed of 220 kilometers per hour. The company said high-end technology used in the racer includes a high-power motor and battery, and an energy regenerative control system will be adopted by commercial EVs like the Z.E. in the future.

Mobile service provider SK Telecom will also introduce information and communications technology that can fuse with EVs in cooperation with the Korea Electric Power Corporation. The company said antihacking chips and tablet car navigations would be showcased.