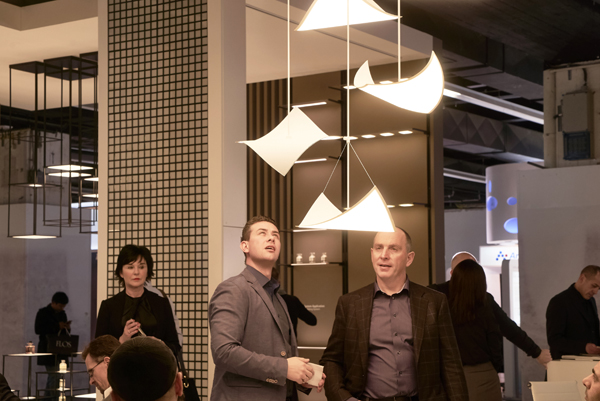 Visitors look at an OLED lighting product by LG Display at the global light exhibition Light + Building at Frankfurt Fair 2016, which ran from March 13 to 18. [LG DISPLAY]

LG Display, a leading display maker, unveiled a plan Thursday to invest in a new production line for organic light-emitting diode (OLED) panels to expand its lineup for the next generation of the technology.

Located in Gumi, North Gyeongsang, the new facility will be the first fifth-generation OLED panel manufacturing plant in the world, with an initial capacity of producing 15,000 glass substrates per month. The new plant will begin mass production in the first half of 2017 and its capacity is expected to gradually increase depending on market conditions, according to the company in a statement. 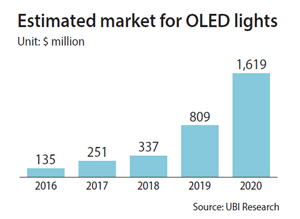 The display maker expects OLED technology to be used in a broad range of products beyond television displays.

The company said that it will save costs and increase efficiency by pooling resources for the development of OLED-based products.

In the beginning phase, the company will target the high-end market, such as upscale retail stores and luxury hotels, to provide task lighting and decorative lighting. Later on, LG Display plans to break into the general lighting market.

Also on the cards is extending applications to automotive fields as well as furniture and architectural materials.

“Based on LG Display’s strong track record and know-how in the OLED display business, we will create synergy with the OLED light business and maintain our strong position in the overall OLED industry.”

LG Display holds unrivaled expertise in OLED technology for TV displays, but the lighting segment has more competitors like Osram, Philips and Panasonic.

Analysts believe that stiff competition among manufacturers will drive down prices and boost the appeal of OLED light products.