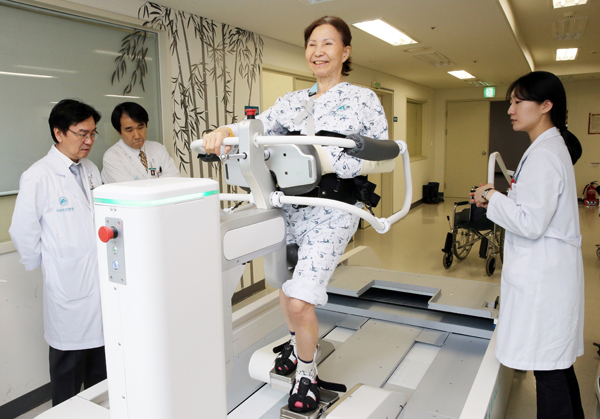 A patient demonstrates a device that helps with ambulatory remedial rehab at the Asan Medical Center in Songpa District, southern Seoul, on Thursday. [HYUNDAI HEAVY INDUSTRIES]

Hyundai Heavy Industries has begun clinical tests with its robots at the Asan Medical Center in Songpa District, southern Seoul, that can help with patients’ rehabilitation.

The test aims to develop and monitor the company’s “Morning Walk” robot at the hospital to test its efficiency and safety.

With data collecting from the tests, the company plans to export the partially automated medical treatment system to the global market.

“One of the key target markets is Europe,” said a spokesman of Hyundai Heavy. “The global medical automation market is expected to grow up to the $67 billion level by 2018.”

Hyundai Heavy was selected by the Ministry of Science, ICT and Future Planning last year to work on medical device automation. The aim is to combine technology with medical services to export the system and attract more overseas patients. The company said it will complete the test process by May 2017.

As well as Morning Walk, Hyundai Heavy is preparing tests for robots that can carry patients, treat tumors and help in orthopedics operations.

“Surgeries like removing tumors need an incision that leaves big scars, but by inserting a small device inside a body, tumors could be removed more safely,” said a spokesman of Hyundai Heavy.

The company said it is also currently increasing its investment in industrial robots that produce cars and liquid crystal display carriers.

“The medical automation industry is growing fast,” said Shin Hyun-soo, who is in charge of Hyundai Heavy’s technical research center. “In order to extend our business territory in the industry we will first try to finish the project that is going on with Morning Walk.”

Hyundai Heavy isn’t the only company working on the development of medical robots.

Earlier this month, the Ministry of Health and Welfare met Alex Gorsky, CEO of Johnson & Johnson, to expand their cooperation and investments in the pharmacy and medical device sectors. They agreed to work on the precision medicine area and in the development of next-generation surgical robots.