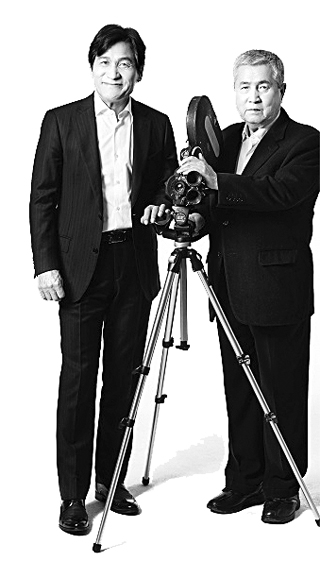 The move is part of their newly launched “The Respect” project, in which the company plans to show support and respect for those who have contributed to the local film industry through various events.

CGV Arthouse, which focuses on screening arthouse and independent films, said Wednesday that it will dedicate one of its screens in the Apgujeong branch in southern Seoul to veteran actor Ahn Sung-ki, while its Seomyeon branch in Busan will focus on director Im Kwon-taek.

Ahn, who debuted in 1957 with the romance flick “Twilight Train,” has since starred in more than 100 productions, while Im has directed 102 films so far and won awards at the prestigious Cannes and Berlin film festivals.

Aside from naming the theaters after Ahn and Im, CGV Arthouse will also hold a series of special screening events during which the audiences can revisit the representative works of the two masters. At the two branches, there will also be permanent exhibitions on the two virtuosos consisting of photos, interviews and, if possible, their own personal items.

The theater chain also said it will donate 200 won ($0.17) per ticket sold at each of the newly designated screens. The company is planning to contribute 100 won from each ticket sale and then add an additional 100 won to make 200 won total per ticket. At the end of the year, CGV Arthouse will donate the accumulated sum to supporting indie films in Korea, under the names of Ahn and Im.

“We consider it very important to look back into Korea’s cinematic history as well as the achievements of notable cineastes in order for our film industry to grow in the future,” said Simon Lee, a team leader at the company.

A CGV official also said it is planning to dedicate additional screens next year to other noteworthy cineastes as part of the project.

The Ahn and Im screens will begin operations on Tuesday.