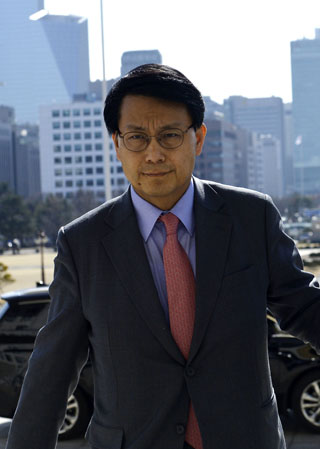 Speculations grew Thursday that a formal political advisor to the president will run as an independent candidate after he failed to win the ruling party’s nomination following a drunken slip of the tongue. The Saenuri Party appears to tacitly support him, however, as it has made no effort to field a rival.

The Saenuri Party announced Tuesday it will reject the application of Rep. Yoon Sang-hyun, a loyalist to President Park Geun-hye, seeking re-election in the Incheon Nam B District general election on April 13. Although no specific reason was given for the cut, the two-term lawmaker found himself mired in controversy last week after a damning audio clip of a telephone conversation was leaked to the press. In the recording, Yoon can be heard telling an unidentified person that Saenuri Chairman Kim Moo-sung should be “weeded out” and “crushed.”

The report exposed deepening fissures between Park’s loyalists and others in the party, increasing pressure to exclude Yoon from the upcoming election.

While Yoon remained silent, speculation grew that the ruling party will not completely abandon him. Because Yoon was the sole applicant seeking candidacy in the Incheon Nam B District, the nomination committee was expected to find new candidates to replace him. No effort, however, has been made so far.

March 25 is the official deadline to register candidacies with the National Election Commission, and the Saenuri Party has less than 10 days to find a candidate for the Incheon Nam B District. Saenuri’s inaction has therefore fueled speculation that Yoon may leave the party, run independently and then rejoin following his victory, which may explain why the party is fielding no candidate in the district.

As of now, two opposition candidates from the Minjoo Party and the Justice Party have declared their bids in the Incheon Nam B District.

Yoon, 53, is a key member of the Park loyalists. A native of Cheongyang, South Chungcheong, he studied international politics in the United States before entering the political arena in 2002 as a policy advisor to Lee Hoi-chang, who was then the presidential candidate for the Grand National Party, the predecessor of the Saenuri Party.

In 2007, he became a Park confidante by serving as the organization and planning chief of Park’s presidential primary. Indeed, there are rumors that he even calls Park “sister,” although Yoon said in a media interview last year that he’d only done that once, and that he’d been drunk at the time.

Yoon was once a son-in-law of former President Chun Doo Hwan. He married Chun’s eldest daughter in 1985 in a wedding ceremony that took place at the Blue House. After their divorce, Yoon married a niece of Lotte Group founder Shin Kyuk-ho in 2010.