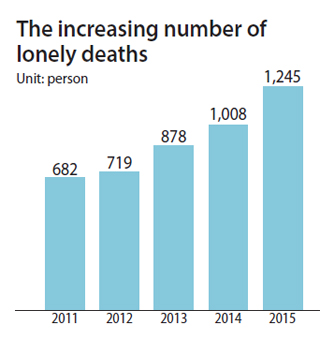 According to a report released Thursday by Rep. Kim Choon-jin, chairman of the Health and Welfare Committee, there were 1,245 cases of lonely deaths last year, up 23.5 percent from the year before.

“Due to the economic downturn and the collapse of a shared sense of community, the number of middle-aged men dying alone keeps increasing,” Kim said. “We have to avoid thinking of this problem as something that only affects the elderly.”

Generally speaking, lonely deaths fall into two categories: those who don’t have any records of family in his or her resident registration and those whose families have given the task of taking over the body.

Seoul City Government uploads the identity of unclaimed bodies to its website when it receives death reports from the police in order to help locate family members of the deceased. If no one reaches out, then after a certain period the body is cremated and sent to a memorial center outside Seoul where it’s preserved for 10 years.

“In South Korea, the ideal image of a middle-aged man is that of a father who has the financial ability to support his family,” says Park Jin-ok, director of a civil group that holds funeral for unclaimed bodies. “If a man fails to meet that standard, he may very well be abandoned by his family and isolated from society.”

Park said the main reason for lonely deaths among middle-aged men is “financial failing,” which can seriously damage family ties.

Lee Hwa-soon, a counselor for impoverished households, explains that some men can be quite reluctant to contact their families, despite missing them terribly, because they feel at fault. 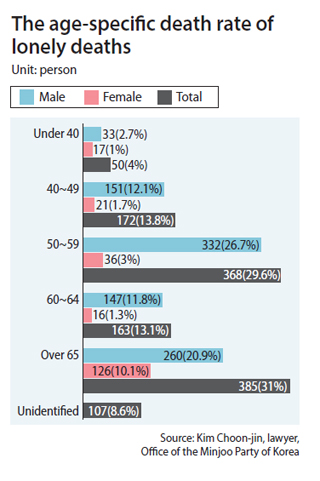 Most middle-aged men who lose contact with families fail to live a self-supporting life and quickly become exposed to poor conditions. Kil Hae-yong, head of Sweepers, a company which cleans the rooms of the deceased and arranges keepsakes, observed that empty fridges, liquor bottles, lottery tickets and medical reports are common items found lying around the homes of a middle-aged men who have died alone.

Park Sa-ra, a human rights activist for homeless people, said middle-aged men whose bodies were left unclaimed are victims who have fallen into the blind spots of society’s social safety network. Park went on to say that, unlike the elderly, these individuals cannot even receive a basic pension.

Last November, one 40-year-old man, surnamed Oh, was found dead under an overpass in the center of Seoul. No one has yet appeared to care for his body.

Oh was raised in an orphanage in Daegu, North Gyeongbuk, since the age of two. He had a daughter with a woman he loved, but he didn’t register them as his family. Although he worked as a cook at a Chinese restaurant, he struggled to earn enough to make his family happy. Ten years ago, he left behind his wife and child and moved to Seoul, hoping to find a job that would enable him to support his loving family.

But after working for a time at a Chinese restaurant, Oh failed to achieve any real success. He became homeless, developing a drinking problem, and died not long after.

Although the number of cases like the Oh’s has gradually increased, the Ministry of Health and Welfare hasn’t even conducted regular research into the issue, instead collecting data only when there’s a request from the National Assembly.


Kim Choon-jin, chairman of Health and Welfare Committee, pointed out that the government acknowledges the lonely deaths issue as a problem, but only when it happens within the elderly community. Kim added that people who aren’t living with families and suffering from financial difficulties are put in a social welfare dead zone of sorts. Song In-joo, a research analyst at Seoul Welfare Foundation, explained that a government policy known as “co-housing,” which places people with no known relatives together, might be a workable solution. Also, job creation projects can help isolated individuals become engaged members of society.