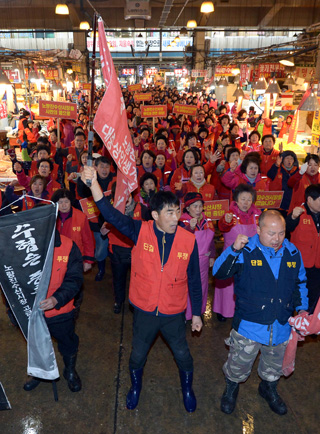 Fish merchants who have been doing business in the old fish market stage a rally Wednesday, refusing to move into the new building because of small space and higher rent.

Wednesday’s opening ceremony for the newly constructed Noryangjin Fish Market in southern Seoul was dismally vacant, with only 20 stalls out of 681 ready for business.

Construction of the new eight-level building, which began in 2012, was completed last October.

However, about 60 percent of the 680 merchants who used to sell fish in the former market place have refused to move into the new space because, they claim, stores have been allotted unacceptably narrow spaces while also having to cope with a hike in rent of 200,000 to 300,000 won ($171 to $256).

“As you can see, sea squirts are sold in boxes, which are 30 centimeters in height and length,” said one merchant surnamed Kwon. “But there aren’t any spaces in the new building to stack them, how do people expect us to do business there?”

All the stores should have moved into the new building by Tuesday, according to the market’s management, the National Federation of Fisheries Cooperative, known in Korean as Suhyup.

“The space allocated for each stall is five square meters, equal to that of the former market place,” said one Suhyup official. “They’re demonstrating because, formerly, they were capable of using the aisles, which is illegal, but in the new building they can’t do that anymore.”

Regarding the merchant’s dissatisfaction with higher rental fees, Suhyup steadfastly insists this is an inevitable consequence of the new building’s construction.

Suhyup notified the protestors that they will not be able to participate in auctions held within the new building. The merchants, however, are not backing down. Instead, they’re getting their produce directly from the source.

“Ladies and gentlemen, the first auction to be held in the new building of the Noryangjin Fish Market will open at one in the morning,” shouted the host of the opening ceremony through a microphone. “Everyone, let’s shout hurrah!” 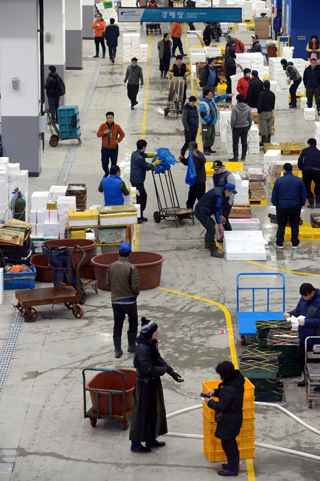 Some fish merchants prepare for the first auction in the new fish market building on Wednesday. [NEWSIS]

But the auction only received 83 tons of produce that morning, less than half the 217 tons it received the day before.

“Hurrah for what?” asked Park Gap-gyu, a 63-year-old merchant broker. “Normally there’d be two to three times more boxes than what we’ve got today.”

“The suppliers, knowing many merchants wouldn’t participate at the auction, only sent a few boxes,” said Kim Duk-ho, director of the Noryangjin Fish Market.

During the meager auction, many merchants were doing business in a fish distribution center just 10 meters from the new building.

Suhyup is considering filing a suit against the merchants who have decided to remain in the old facility, citing unauthorized occupation and requiring compensation for delaying construction projects planned at the old site.

The Noryangjin Fish Market was constructed in 1971 and discussions on its modernization began in 2007. The new building was originally planned to open Last January, but due to disagreements from merchants, the date was postponed to March.

Starting Wednesday, ice and salt water supplies to the merchants will be cut, but they remain unfazed, and are planning to protest the new move every day at 9:30 a.m. until they win.