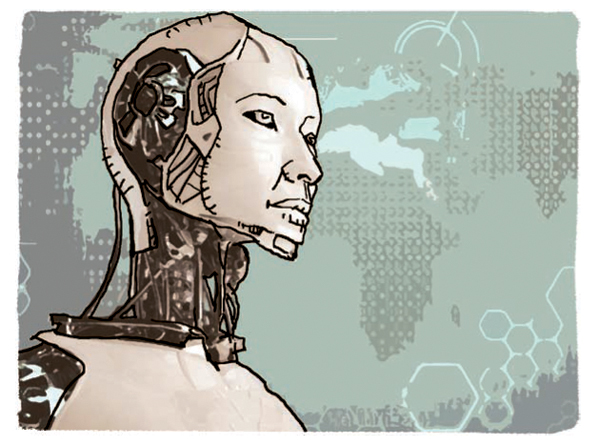 The last several days have been all about the Go match between Lee Se-dol and Google DeepMind’s AlphaGo. But even without AlphaGo, the most important keyword of 2016 is AI. The hero of the Consumer Electronics Show 2016, the world’s largest electronics exhibition held in Las Vegas from Jan. 6 to 11, was artificial intelligence. While consumer electronics were showcased, automated devices that use AI technologies to operate, such as smart cars, robots, smart home devices and Internet of Things, led the innovation trend.

The Future of Jobs report by the World Economic Forum, published on Jan. 18, predicted that automation as a result of AI advancement would eliminate five million jobs by 2020. It proposed a gloomy prospect that 7.1 million jobs would disappear and 2.1 million would be added, killing five million jobs in effect. It seems like AI is taking away jobs. However, we need to focus on the quality, not the number, of jobs. The report predicts that jobs using simple processing skills will decrease, but new jobs that require human creativity in technology, professional services and media will appear. More importantly, we need to predict and be ready for changes in working conditions.
In fact, AI has been associated with negative images. In Hollywood films such as the “Terminator” series, “Oblivion” and “Transcendence,” AI is often depicted as the new villain threatening humanity. But there are considerable counter-arguments. The good and evil are based on emotion, and AI, which does not have feelings, can be neither an angel nor devil. AlphaGo places a stone based on mathematical calculation without any feelings for winning or losing. Of course, no one can be sure about the future, but it is too early to be pessimistic.

AI can be compared to nuclear power. A properly controlled nuclear program can provide an unlimited source of energy. But once it goes out of control, we may face an unexpected tragedy such as the Fukushima meltdown. We must make efforts to keep AI strictly under human control to prevent even the remotest possibility. In January 2015, astrophysicist Stephen Hawking, Tesla Motors’ Elon Musk and other experts signed an open letter on the social impact of artificial intelligence. They proposed that researchers do not “create something which cannot be controlled”.

The way to control advanced technologies and AI is to keep the initiative in scientific and technological innovation in human hands through continuous innovative research and development. Rather than suddenly allocating a research budget on artificial intelligence just because it is the buzzword of the time, scientists should be provided with conditions and environments to study various innovative topics.
Last week, I was invited to the German Academic Exchange Service to tour the research and innovation sites in former East Germany. Surprisingly, Germany, which already has a world-class science and technology level, constantly and consistently promotes advanced technology strategies: the High-Tech Strategy adopted in 2006, the High-Tech Strategy 2020 in 2010, and the New High-Tech Strategy in 2014. Evidence of aggressive investment and efforts to maintain the leading status in innovation were found in research fields in academia and industry.

The federal government of Germany has been expanding its total research and development budget by 5 to 10 percent annually during this period. The federal Ministry of Education and Research’s official in charge of the innovation initiative said that the federal government continuously establishes and funds innovation clusters that promote joint research by academia, industry and research institutes in former East German regions. Various scientific research projects are in progress. However, Germany would not suddenly allocate emergency budgets on popular topics. Investment on scientific and technological innovation should be made with a long-term perspective. Only then can humans control the outcome.