Korea, China talk about the FTA

Korea, China talk about the FTA 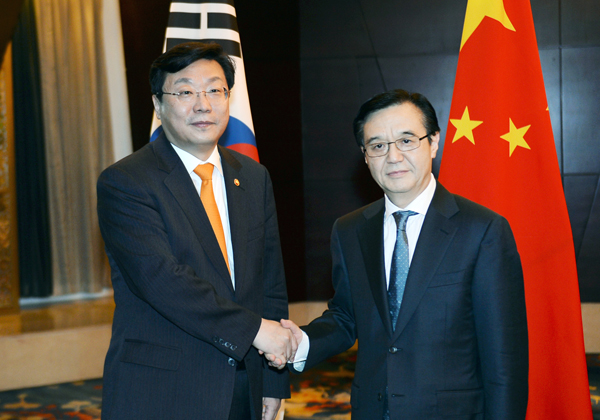 Trade ministers from Korea and China met for the first time since the two countries signed a free trade agreement (FTA) in 2014 and started further negotiations on the investment framework of the agreement, particularly related to the services sector.

They hope to reach an agreement by the end of this year.

Joo Hyung-hwan, the minister of trade, industry and energy, began a four-day visit to Beijing on Wednesday and held talks with Chinese commerce minister Gao Hucheng on Thursday. The Korean government said that as China’s growth slows, the two countries plan to shift their focus from the manufacturing sector to services, which are expected to grow rapidly.

“Chinese investment in the local market has quadrupled in the past three years from $480 million in 2013 to $1.98 billion last year,” the Korean government said in a press release, “and it is expected that the two counties’ tourism, health care and other services-related industries will grow rapidly once we come to an agreement on the service sector investment deal.”

The ministry emphasized that the negotiation on the Framework for Korea-China FTA Service and Investment needs to take place as early as possible to protect investors.

FTA committees and working groups from the two countries will have regular meetings more than once a year to follow up on how the agreement is working. The two countries will speed up work on a Korea-China FTA Industrial Complex, which is planned for Saemangeum District in Gunsan, North Jeolla.

The ministry added that the countries will cooperate not only bilaterally, but also multilaterally at G-20 summits and Asia-Pacific Economic Cooperation summits. This year’s G-20 Trade Ministers Meeting will be held in July in Shanghai.

Meanwhile, Joo met with a number of Korean and Chinese company representatives to discuss challenges they face and to find ways to improve trade between the two countries. This was the first time Joo met with foreign companies outside Korea in an effort to boost trade.

He also talked to Jin Liqun, president of China’s new Asian Infrastructure Investment Bank, on Wednesday to discuss how it can get more Korean companies to participate in the bank’s work.