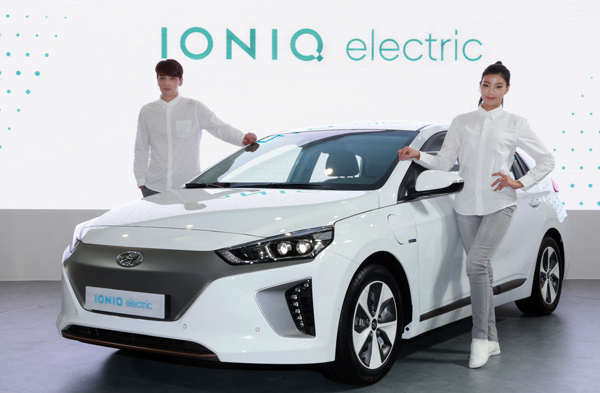 The model follows the release of the eco-friendly Ioniq hybrid electric vehicle (HEV) in January. The electric Ioniq is the only new car launched at the expo, although its actual entry into the market will be in June.

“The Ioniq boasts the longest driving mileage, enough to run the whole length around the island on a single charge,” Kwak Jin, vice president in charge of domestic sales at Hyundai Motor, said at the expo. “We plan to sell at least 4,000 Ioniq EVs this year alone.”

The car is solely powered by an electric motor and battery, with no carbon emissions. It can drive as far as 180 kilometers (110 miles) on a full charge using its 28 kilowatt-hour lithium-ion polymer battery, which can be fully charged in 24 minutes, the company said.

The company offers an Ioniq program to aid customers with overall management of EVs, such as charging and maintenance. Consulting service for home-charger installation and a mobile service that notifies drivers of nearby charging stations are part of the program.

The vehicle has a 10-year or 200,000-kilometer warranty, the longest among competing EVs in the nation. It comes in two trims, N trim and Q trim, which has a sticker price of 40 million won ($34,400) and 43 million won without government subsidies.

Teaming up with Kia’s Niro, a small hybrid SUV to be released in the market later this month, Hyundai is attempting to take the lead in the growing market.

However, Hyundai Motor is not the only manufacturer looking to make inroads in the domestic EV market.

As interest for greener cars rises across the world, global carmakers are increasingly betting on their electric car models to be their future growth engine. In Korea, the government is backing the industry with plans to provide subsidies on 8,000 EVs.

Nissan Korea’s Leaf has sold 210,000 units globally since its launch in 2010, and the company has proposed two major plans on Friday to penetrate the Korean market. One is diversifying its distribution chain. In time with the expo’s start on Friday, customers can find the Leaf at two branches - the Shinjeju branch and Seogwipo branch - of Lotte Himart operating in Jeju. Another plan is to expand Leaf’s entry model to two trims, adding the S trim priced at 45.9 million won, while slashing 3 million won from the existing SL trim to 51.8 million won.

“With a more diversified distribution channel, we will increase the chances of customers to experience the quality of our best-selling EV Leaf and expand the Nissan brand in the Korean market,” said Takehiko Kikuchi, CEO of Nissan Korea.

Renault Samsung Motors also announced plans to sell more than 2,000 units of its flagship SM3 Z.E this year, an EV which recorded the highest number of accumulated sales domestically. It will also pioneer providing EV taxis in the nation.

Tesla, a giant EV provider which completed registration of establishing a Korean corporation last December, may also add to the fierce competition by entering the market this year.