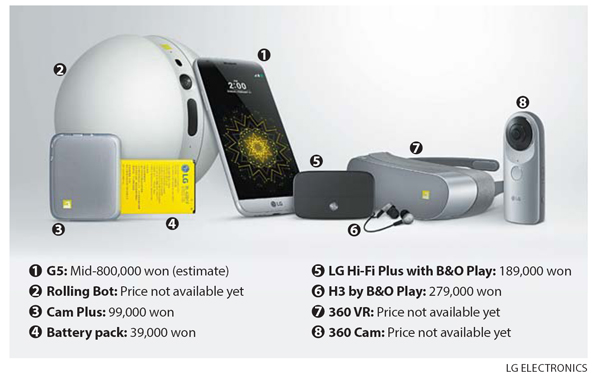 LG Electronics will roll out its modular G5 smartphone on March 31 with expansion slots at the bottom of the handset, the company said on Friday.

The company’s latest flagship smartphone comes with a wide range of module options to enhance features on music, camera and battery life.

However, the modular expansion function may mean increased costs for customers. The smartphone maker has yet to announce the release price of the G5, but Cho Joon-ho, head of mobile communications at the company, hinted that it will be in the 800,000 won ($690) range.

In a bid to reduce costs, LG Electronics will offer different promotions and discounts, such as free camera and battery modules, until April 15.

One of the most anticipated options is a collaborative piece with Danish audio manufacturer Bang & Olufsen.

Dubbed LG Hi-Fi Plus with B&O Play, the module can revamp the sound experience of media, upgrading any application producing sound, including YouTube and Spotify.

The LG Hi-Fi Plus supports native DSD playback and will come with a pair of high-end H3 B&O Play earphones. 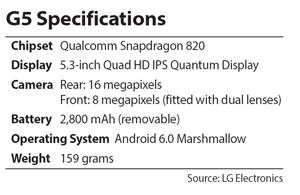 The two products can be purchased for 289,000 won until April 15, a 38 percent discount from the original prices.

The reception given to the G5 will determine whether LG will expand the modular feature.

The key to success lies in LG’s ability to offer interesting features through the modular expansion.

The tech company is now seeking to join hands with developers and establish an ecosystem for modular expansion.

In line with the efforts, LG held a developer conference on Thursday.

The forum was devoted to helping developers create an open ecosystem for modular development and guiding interested developers.

The president said that LG will cooperate with third-party and other consumer electronics companies to work on modular development.