Korean oil heiress uses her prominence to pay it forward

Korean oil heiress uses her prominence to pay it forward 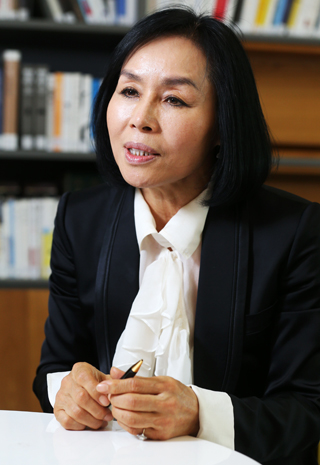 Lee Young-soo, the CEO of midsize energy company Jongwha, says she hopes to contribute to creating a culture of sharing in Korean society during an interview with the JoongAng Ilbo.[JOONGANG ILBO]

Lee Young-soo, the CEO of midsize energy company Jongwha, is known among social activists not only as a woman with big pockets, but also as a problem solver who will readily take on their causes.

Lee, 65, funds overseas medical services independently and covers any financial gaps when activists face financial problems preparing flights or accommodations. She has also paid for volunteer lunches and even purchased medicine for the services she supports.

Beyond financing, she volunteers as well. Since visiting Mongolia in 2000 on a medical service mission, she has gone on to visit several countries in need. Lee volunteered in Vietnam in January and returned from the Philippines just last month.

Over the past 16 years, her volunteer missions have taken her to 10 countries, including earthquake-ravaged Haiti, refugee camps in Lebanon and Syria, Sri Lanka, and economically impoverished regions in Ethiopia and Thailand.

Lee first started helping the socially disadvantaged in her own community nearly three decades ago, following a period of emotional turmoil.

“My husband passed away in 1989 after 11 years of marriage, and doctors found a tumor in my pancreas soon after,” she recalled. “After surgery, it took more than two years for me to make a full recovery.”

She realized how deep the appreciation for life was among the terminally ill, she explained, which led her to start working with the Korean Open Doctors Society, a nonprofit medical service organization.

“I was given another chance at life, and I found the courage to volunteer in remote disaster-hit regions, regardless of the dangers - terrorism or endemic disease,” she said.

Lee is a self-described “golden spoon,” a reference to the popular “spoon class theory” in Korea which classifies individuals based on the assets they inherited from their parents. The spoons - representations of the country’s class divides - range from gold to silver, bronze and dirt.

She is the youngest of the eight children of the late Lee Jong-yeop, chairman and CEO of Kioil, a gas station operator also known as Kyung Il Oil.

In the 1960s, her father was one of the most prominent figures in the oil industry and gained his wealth by developing mines and retailing oil.

But despite his success, he always taught his children the significance of living a life that helps other people, Lee said.

“My father always told me that helping other people with money is the easiest thing a person can do,” she said. “So I hope I can contribute to creating a culture of sharing in Korean society.”

The oil retailer’s current CEO, Lee Young-ho, her younger brother, as well as her other siblings, have put forth nearly several billion won in donations toward different causes.

Her mother, who passed away in August, is also known for having donated nearly 1 billion won ($861,000) to Seoul National University Hospital for research.

Lee also operates a speech academy specifically for female defectors and students to help them battle the stigma around the North Korean accent.

“If the inter-Korean relationship warms again in the future, I hope to support medical services for North Korean residents,” Lee said, adding that she also plans to fund an education program on unification and North Korea.