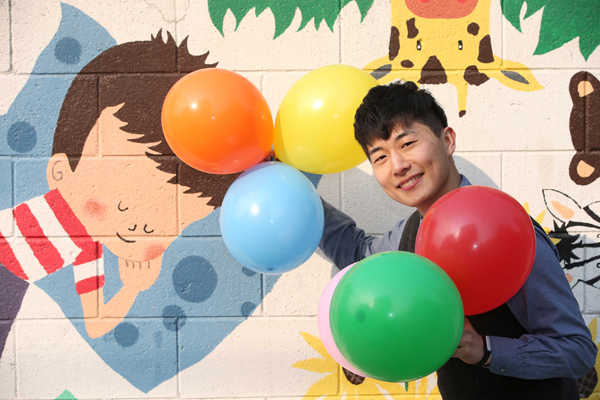 Last August, members of the group Add Volunteer performed a play about Korean independence fighters in front of the old red brick museum and former prison of the Seodaemun Prison History Hall in central Seoul.

“In middle and high school, students have to complete a certain amount of volunteer hours,” said 26-year-old Kim Dong-hyun, a Kookmin University junior majoring in computer engineering and the organization’s founder. “As a result, people end up volunteering against their will. So I thought of ways to make volunteer work more fun so that people would be more willing to take part.”

Add Volunteer organizes various volunteer activities on the last Saturday of every month. Each month, Kim and the group’s other four co-founders, as well as its participants, select that month’s activity.

The group actively recruits through Facebook, and is always looking for fresh faces. Last February, 10 people signed up as regular members, and participants vary from university students to the elderly. All members pay a monthly fee of 10,000 won ($8.60) to the organization.

In the past, the group has helped organize lectures by homeless people who sell copies of The Big Issue, a magazine sold by the homeless and vulnerably housed, painted the walls of dilapidated schools and delivered briquettes to the underprivileged.

Their performance in front of the Seodaemun Prison History Hall was designed to inform as well as entertain; during the show, which took place on Aug. 15, Korea’s National Liberation Day, a young woman in a white jeogori (traditional Korean top) and traditional black skirt with a name tag that read “Park Ja-hye” went around handing out pamphlets about independence fighters.

The historical Park Ja-hye was a nurse who volunteered during the March 1 independence movement by caring for the injured and leading an independence organization for nurses. Another performer played Chae Eung-un, the oldest soldier to take part in the resistance force against Japan.

“We wanted to shed light on the independence fighters who have done so much for the nation but are forgotten by today’s youth,” Kim said. “The performance served as a good history lesson for both the volunteers and audience members.”

Kim established Add Volunteer in 2013. He says every time he saw 30,000 won being withdrawn from his account each month and going to relief organizations, something felt amiss.

“Not knowing where the money was going or to what end felt wrong,” Kim said. “So I became determined to develop volunteer activities people can actually enjoy.

“I feel most satisfied when I hear that people who first started volunteering in Add Volunteer continue doing it in other places.”

One woman in her 40s, after participating in the group’s briquette delivery service, has been regularly helping out in a welfare center for seniors near her home, Kim said.

While half of Add Volunteer’s participants are newcomers, the other half are people who have stayed on, having grown fond of volunteer work after joining the organization.

Kim’s goal for 2016 is to further spread the culture of playful volunteer work.

“I want to change Korea’s volunteer work culture,” Kim said. “If people who had a taste of fun through volunteer work at Add Volunteer continue that work outside the organization, visible change can happen.”