Left: Syrian refugees head on foot to the border separating Macedonia and Serbia. In Presevo, Serbia, they will board a train heading to Croatia.

For 26 years, award-winning photographer Sung Nam-hun has traveled the world, documenting refugees and the displaced, including the Romani people in Europe.

The inspiration for the project came in 1991, when he was studying in France.

“Maybe it was because I was a foreigner myself,” said Sung, 53. “The eyes of the people who were wandering the world because they had lost their homes touched my heart. Since then, I thought of it as my duty to document these people, who were often ostracized or marginalized.”

In January, Sung rode on a train specially operated by Serbia to transfer Syrian refugees to Hungary and Western Europe. The train was heading to Sid, on the Serbian border with Croatia.

Sung took a picture of a young girl lying down on a shelf in the train’s compartment. She looked exhausted from a long and arduous trip, yet like any child, she peered up at the camera with intense curiosity.

The photographer received one of his first honors, a World Press Photo award, in 1998 for a photograph he took of a democratization protest in Indonesia. Several years later, he published “The Unrooted,” a collection of pictures depicting the lives of refugees from Kosovo, Ethiopia, Afghanistan and Iraq. 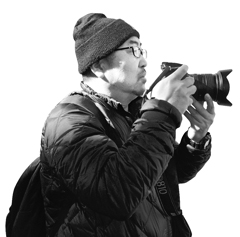 Sung is currently raising funds online to publish a second version of his book with about 200 photos he took over the last 10 years in Asia, Africa and South America. The second edition will feature people who have lost their homes due to environmental disasters and climate change.

The second edition of “The Unrooted” will be published this fall.

Sung uploads his work on Daum Story Funding, a fund-raising website for artists, writers and others, on which anyone interested can donate.

One of the places Sung is most familiar with from his travels is Bangka Island in Indonesia, where 60 percent of the world’s tin is deposited and also where people are losing their homes due to environmental destruction.

In 1998, tin-mining rights, only granted to state-run-companies, were given to private entities, and since then, environmental destruction has drastically worsened.

“After realizing that tin was a good source of money, even area farmers gave up on agriculture and roamed around Bangka hunting for it,” Sung said. “They wander around trying to find muddy water - the leftovers after mining companies have filtered out the tin - to find remaining minerals.”

The 53-year-old has also visited gold mines in Peru, located at an altitude of 5 kilometers (3 miles) above sea level.

“People from the city come to the gold mines, thinking it’s their last hope,” he said. “Despite the lack of gold remnants and severe pollution from toxic heavy metals, people still come since they have nowhere else to go.”

Sung’s goal is to collect 5 million won ($4,300) through online fund-raising. As of Wednesday, about 5.3 million won had been donated, with 43 days left until the deadline.

The money is far from the amount needed to publish the book, but Sung still uploads stories on the site for donations to raise awareness.

“There are so many people suffering all over the world,” he said. “It’s my job as a photographer to remind the world of their agony.”