Missiles fired by North Korea, but one doesn’t work

Missiles fired by North Korea, but one doesn’t work 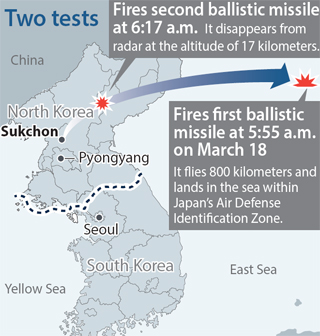 The South’s Joint Chiefs of Staff said in a statement Friday that one missile, which was believed to be a medium-range Rodong missile, was fired around 5:55 a.m. from Sukchon, north of the capital of Pyongyang, and it flew about 800 kilometers (500 miles) before falling into waters off its east coast. The Joint Chiefs of Staff added that the waters were within Japan’s air defense identification zone.

A second projectile was fired at 6:17 a.m. and disappeared from radar at an altitude of 17 kilometers. The military said it is examining whether it exploded. There is also the possibility it was a false radar image.

A source at the Ministry of National Defense said South Korea’s military is closely watching for signs of a possible fifth nuclear test by the North.

On Tuesday, North Korean leader Kim vowed a nuclear test “in a short time” as well as tests of several kinds of ballistic rockets capable of carrying nuclear warheads. Kim allegedly led a test of a new technology that would allow a ballistic missile armed with a warhead to re-enter the earth’s atmosphere, according to North Korea’s state-run Korean Central News Agency.

South Korea denounced the North’s recent missile launch as a violation of UN Security Council resolutions and a grave threat to the security of the Korean Peninsula.

Shortly after the North’s missile launches Friday, the United States and Japan said they were a clear violation of the UN resolutions.

Following the North’s fourth nuclear test on Jan. 6 and a long-range missile test on Feb. 7, the UN Security Council unanimously adopted a strong resolution, and the United States and South Korea kicked off their largest-ever military drills with 300,000 South Koreans and 17,000 American troops.

In defiance of mounting pressure from the international community, North Korea’s leader in recent weeks claimed his country has miniaturized nuclear warheads and warned of an “all-out offensive” and “pre-emptive” nuclear strikes against Seoul and Washington.

Friday’s firing of the mid-range missiles was the first since March 2014. A Rodong missile has a maximum range of 1,200 kilometers, covering all of South Korea and much of Japan.