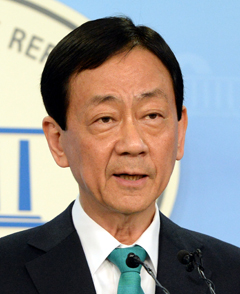 A former health minister of the Park Geun-hye administration is expected to join the main opposition party after the ruling party denied him a ticket for the April 13 general election.

Rep. Chin Young, a three-term lawmaker representing Seoul’s Yongsan District, left the Saenuri Party on Thursday, claiming that his failure to be given a nomination was “bitter retaliation” for having challenged the president. Chin, 65, served as Park’s first welfare minister, but resigned from the post after a conflict with the president over implementing her pledge of basic pensions for senior citizens.

“If he comes to our party, we will welcome him,” Kim Chong-in, interim chairman of the Minjoo Party of Korea, said Friday. Kim, however, said Chin had not joined yet.

A key official of the Minjoo Party told the JoongAng Ilbo on Thursday that Chin will soon join. If Chin does, he will be the first Saenuri politician to join the Minjoo Party after failing to be granted a ticket.

Other politicians dropped by the conservative ruling party have left it to run as independents.

Kim and Chin are known to be close after working together on Park’s 2012 presidential campaign. Kim was policy chairman, and Chin supported him as deputy chairman. Together, the two created Park’s economic pledges centered on the theme of “economic democracy.”

Earlier this month, rumors spread that Chin would be eliminated, and the Minjoo Party deliberately did not pick a candidate for Yongsan District. Sources told the JoongAng Ilbo that the Minjoo Party invited him to join after he was dropped earlier this week, and Chin accepted it.

Asked by the JoongAng Ilbo about the possibility of joining the Minjoo Party, Chin said Thursday, “My heart is leaning toward that direction.”

Chin is expected to join the Minjoo Party over the weekend, according to a Kim associate.

“We want to give him some time to exchange opinions with his backers,” the source said.

Yongsan District in Seoul has long been a Saenuri Party stronghold. While the opposition held the district for four years after the election in 2000, Chin won three consecutive terms since.

According to a senior Minjoo Party official, recruiting Chin was a long-term goal.

“Kim Chong-in is an insightful planner,” Kim Sung-gon, chairman of the Minjoo Party’s strategic nomination committee, told the JoongAng Ilbo. “When I told him that we could not find a suitable candidate for Yongsan, he said we should decide on it based on the Saenuri nomination outcome. Yongsan was the only district Kim asked us to wait to fill.”

Recruiting a politician once known as an “original Park loyalist” will give the party strength in the capital region races, Minjoo Party officials said.

The Minjoo Party also announced Friday that it will field Sohn Hye-won, the party’s chief publicist, in Mapo B District of Seoul.

The district used to be occupied by Rep. Jung Cheong-rae, a hard-line Roh Moo-hyun loyalist famous for his harsh rhetoric. The party, however, dropped the two-term lawmaker earlier this month because of his penchant for courting controversy.

Jung, a former student activist, has fixed support among liberals. However, last year, he was punished by the party’s ethics tribunal for his harsh criticism of one fellow lawmaker. The party’s approval ratings actually plunged after its recent decision not to nominate Jung.

According to sources, fielding Sohn in Mapo B is a way to appease angry Jung supporters, because she was recruited by the party’s former chairman, Moon Jae-in. Jung also requested Sohn to run in Mapo B.