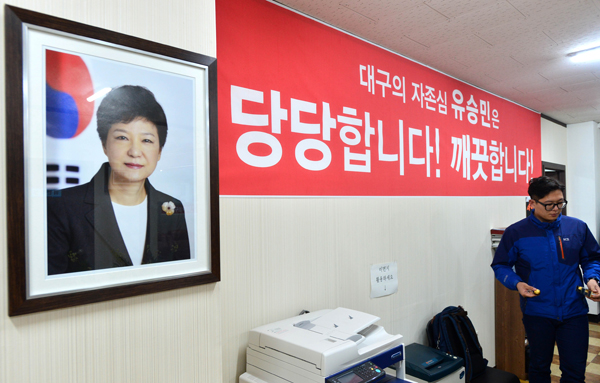 A photo of President Park Geun-hye and a banner reading “Yoo Seong-min, the pride of Daegu, is clean and dignified” are hung up on the wall of Yoo’s campaign office in Daegu on Friday. Rep. Yoo has not shown up in public for three days while the ruling party’s nomination committee could not reach a decision over the fate of Yoo. [NEWSIS]

The Saenuri Party’s internal conflict between President Park Geun-hye loyalists and her adversaries reached a new peak on Friday, as a shouting match erupted during the Supreme Council’s morning meeting. Both sides fought over the integrity of the ongoing candidate selection process, overseen by key Park ally Lee Han-koo.

“[The current nomination process] sounds like a story from the past, when we were under a dictatorship,” Chairman Kim Moo-sung said, questioning the fairness of the selection in which many Park opponents were dropped.

Over the past week, the party’s nomination committee reviewed applicants for the 253 constituencies nationwide for the April 13 general election. As the selection progressed, many Park adversaries were dropped, but the fate of Rep. Yoo Seong-min, who represents Daegu’s Dong B District, has remained undecided.

Yoo, a three-term lawmaker and former floor leader of the ruling party, was once an ally of Park, but the two parted bitterly last year after she publicly condemned him for “politics of betrayal.” Park loyalists have consistently argued that the political identity of Yoo and his associates part from that of the Saenuri Party.

While the nomination committee did not hesitate to expunge allies of Yoo, no official announcement was made as of Friday pertaining to his fate. Concerns were high that dropping Yoo would hurt the party’s campaigns in the capital region, as the 58-year-old lawmaker enjoys a nationally recognized profile. Lee, the nomination committee chairman, didn’t budge. In fact, he put further pressure on Yoo to give up his bid.

“He had enjoyed many benefits offered by the president and the party by winning three elections in [Park’s political hometown of] Daegu,” Lee said. “He must decide because the party is under turmoil because of him.”

The request was rejected by the nomination committee. Rep. Won Yoo-chul pressured Kim during the Supreme Council meeting to approve the nominations as soon as possible, before media criticism regarding the ruling’s party’s factional chasm snowballs on the eve of the election.

Another Park ally, Rhee In-je, proposed that Kim’s demand should be voted on, taking into account that five of the nine Supreme Council members are Park loyalists. But the voting didn’t take place due to resistance by Park opponents. Without reaching a conclusion, the Supreme Council ended their morning meeting and agreed to meet at 9 p.m. Friday.

As the discord continued, the nomination committee also canceled its meeting, scheduled for 2 p.m. “Outside committee members said they won’t attend the meeting unless Kim apologizes for questioning our integrity,” Lee said. “So I had no choice.”

“I can try to persuade them about the apology, but the nomination committee can only normalize its operation after the Supreme Council has approved the delayed nominations,” he said, indicating that what he truly wants is Kim’s submission.