Seoul lashes out at Tokyo over textbook claims

Seoul lashes out at Tokyo over textbook claims 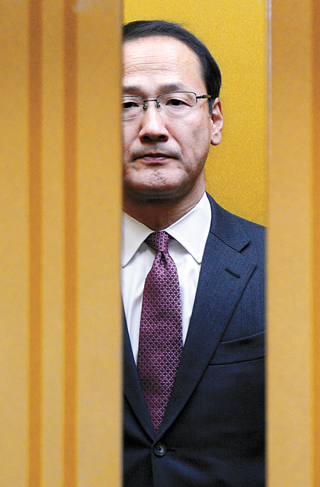 Hideo Suzuki, a minister at the Japanese Embassy in Seoul, is summoned to the Ministry of Foreign Affairs in central Seoul on Friday, as the Korean government protests Japan’s approval of high school textbooks that push Tokyo’s claim over the Dokdo islets.[NEWSIS]

Korea condemned Japan’s approval of new high school textbooks on Friday that renewed Tokyo’s claim over the Dokdo islets in the East Sea, putting new stress on ties between the neighbors.

Of 35 high school textbooks approved by Japan’s Ministry of Education, Culture, Sports, Science and Technology on Friday, 27 textbooks said Dokdo is Japanese sovereign territory and South Korea’s occupation of them is illegal.

Bilateral ties between Seoul and Tokyo hit a recent high last Dec. 28, when the two countries reached a landmark agreement in the long-running diplomatic battle over the Japanese military’s wartime sexual enslavement of Korean women. The deal included an apology from Japanese Prime Minister Shinzo Abe and a 1 billion yen ($8.3 million) compensation fund for the victims.

But in the newly updated textbooks, some have watered down the description of Japan’s treatment of the so-called comfort women. Instead of saying the women were “forcibly brought” into sexual servitude, they say they were “sent” or “mobilized.”

Korea’s Ministry of Foreign Affairs released a statement saying it deeply deplores the Japanese government’s approval of the textbooks and requests immediate rectification, emphasizing that Dokdo is Korea’s territory historically, geographically and by international law.

“The Japanese government should never forget that teaching history correctly is its grave responsibility to future generations in Japan and neighboring nations that suffered from Japan’s invasion,” the ministry said in the statement.

“We urge the Japanese government to show its sincere behavior to move forward the bilateral relationship by facing up to the reality of history.”

The Foreign Affairs Ministry summoned Hideo Suzuki, a minister at the Japanese Embassy in Seoul, to lodge a complaint with Tokyo over the issue. Chung Byung-won, director general of Northeast Asian Affairs, met the Japanese diplomat and urged the Japanese government to rectify the textbooks. Suzuki reportedly replied that his country’s stance is clear.