Happy day for the ‘Prince of Tears’

Happy day for the ‘Prince of Tears’ 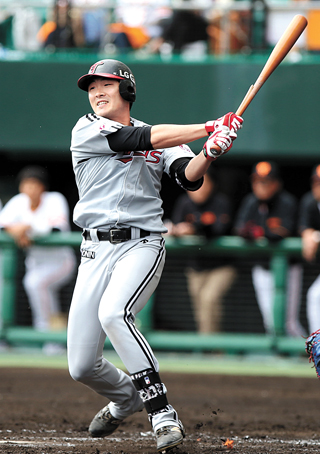 LG Twins outfielder Lee Hyung-jong hopes to put out a good performance as a batter for the Twins this season. [LG TWINS]

LG Twins outfielder Lee Hyung-jong took the plate in the ninth inning against the Lotte Giants on Mar. 13. His team was behind 2-6, and he was up against Giants veteran pitcher Jeong Dae-hyeon.

In other words, it wasn’t looking good for the player whose tendency to cry after tough losses earned him the nickname “Prince of Tears.”

But after letting the first pitch pass by, Lee drove Jeong’s second curve ball over the left fence. The solo homer was Lee’s first of the season. After running the bases, Lee was greeted by his teammates in the dugout. The achievement marked the end of a long and arduous journey for Lee, and he seemed to be struggling to take it all in. He only cracked a smile when Luis Jimenez jokingly told him, “Don’t cry.”

Lee started his baseball career as a pitcher, and it was in this position that he experienced his first heartbreaking defeat.

It happened when he was a senior in Seoul High School in 2007, during the JoongAng Ilbo-sponsored President’s Cup National High School Baseball Tournament. In the final game against Gwangju Jeil High School, Lee took the mound as relief pitcher in the first inning with one out after the starting pitcher unexpectedly broke down.

Although Lee was worn out after throwing 147 balls the previous day, Seoul High School had no other option. He played the entire game, and the team was leading 9-8 until the ninth inning. But late in the ninth inning, Lee gave out two runs-scored and lost the game. He began to cry uncontrollably after the hit that finally finished the game, which originated his nickname.

“It was the first game in which I tasted failure,” Lee would later say. “If I wasn’t as exhausted from the previous day, I could have thrown better balls and secured a win for us. It just seemed so unfair, and I couldn’t help but tear up.”

Lee graduated and joined the Twins with high expectations. Lee was offered a lucrative signing fee for a rookie right out of high school at 430 million won ($360,000). But he needed surgery on his elbow soon after joining the team. Time went by as he underwent more surgeries and subsequent rehabilitation. It wasn’t until 2010 that Lee notched his first win in the Korea Baseball Organization (KBO) League. But the glory was short-lived. He soon had a falling out with the team and began skipping practice. Lee quit not only the team, but the sport entirely after the season finished.

He hoped to start fresh as a professional golfer. But his baseball dreams never went away, and he eventually decided to return to the sport. The Twins gave him a second chance in 2013. But this time, his shoulder halted his comeback. “I wanted to pitch again but then pain on my shoulder stopped me from throwing more balls,” said Lee. “After hearing I would have to have another surgery, I decided to call it quits with pitching. Instead, I decided to try my luck as a batter.”

After going from a pitcher to a golfer and finally to a hitter, he started in the KBO’s minor league. He made appearances in 39 games and recorded a .305 batting average, 13 runs batted in and five stolen bases. Twins manager Yang Sang-moon kept a close eye on Lee and called him up to the KBO during the spring camp over the winter.

After the camp, Lee attended preseason games. Lee was unable to land a hit in his first four games, but his homer against the Giants was enough to bring smile on Lee’s face.

“I was worried after the first four games without any hits,” he said. “But I was happy to send the ball over the fence as my first hit.

When asked about Lee’s prospect as a hitter, the Twins manager Yang said, “It has only been a year since he became a hitter. He has potential. I will keep my eye on him.”

Lee met Yang for the first time in 2008 when Yang was a pitching coach for the Twins.

“Yang took a good care of me,” said Lee. “But I haven’t shown him anything but injuries. Now it’s time for me to repay my debt. ”