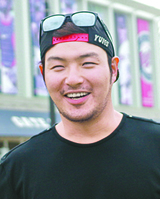 The Minnesota Twins of Major League Baseball (MLB) have begun a marketing campaign centered on Park Byung-ho, and the initiative is paying off.

The Twins began selling “Byung-ho’s Balcony” ticket on Mar. 14. Byung-ho’s balcony refers to the seats allocated for Park fans. It also designated the infield stands near third base as “Park Byung-ho’s seats” during the home game at Target Field in downtown Minneapolis, Minnesota, against the Milwaukee Brewers on Saturday. The team created a specific page online exclusively to sell the balcony seats.

The price of a single ticket in ‘Byung-ho’s Balcony’ is $33, $2 more expensive than a regular single ticket. The team, however, throws in an exclusive Korean-themed Twins cap for buyers. The cap features Park’s logo and the Minnesota Twins inscribed in Korean, and the Korean flag is printed on the right side.

The tickets are selling well and are expected to be especially popular among those in the Twins’ Korean fan club, which was created last month.

Park has been making appearances in the club’s fan events. For instance, the Twins has started a contest called “Who Wore It Best?” a parody of March Madness in the NCAA Basketball. Twins players took photos while wearing a sweatshirt that will be given to fans at the season-opening game at home on Apr. 12. The photos are turned into a bracket and uploaded to team’s social media page, where fans can vote for the player they think looks the best in the sweatshirt. Park has received enough votes to make it into the final four, alongside other key players like designated hitter Miguel Sano, second baseman Brian Dozier and third baseman Trevor Plouffe.

The Park-focused marketing campaign is particularly apparent in the Twins’ souvenir shop at Hammond Stadium, where the team plays its spring exhibition games. T-shirts bearing with Park’s surname and number are displayed on the top shelves.

The campaign stems from the team’s confidence in Park’s skills and a desire to target the Korean market. Many companies in Korea including Samsung, LG, Hyundai Motors and Nexen Tires have signed sponsorships with Choo Shin-soo’s Texas Rangers and Ryu Hyun-jin’s Los Angeles Dodgers to advertise in the ballpark.

Uniforms, which are sold between $90 and $250 each, are also considered a lucrative source of revenue. The uniform bearing Ryu’s name, for example, was 17th-most-sold uniform in the MLB in 2013.

“Obviously the most important element in bringing in a new player is his ball skills,” said Martin Kim, who works for the Dodgers’ international marketing department. “But MLB clubs are well aware that having a star South Korean player in the roster creates an additional economic benefit for the team.

In the Grapefruit League games, Park is currently leading the Twins in home runs and runs batted in (RBIs) with three homers and nine RBIs.