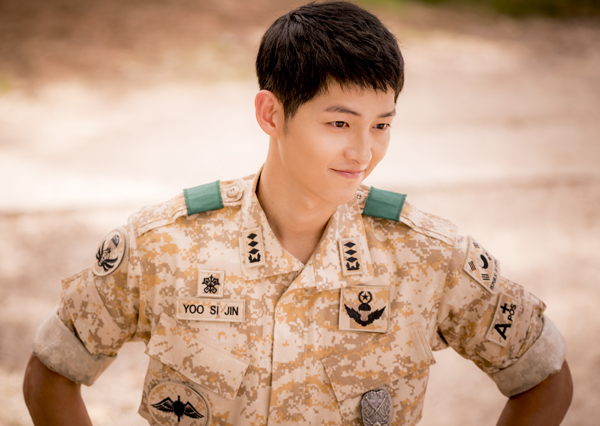 One of the often talked-about TV show these days is “Descendants of the Sun” on KBS2. Actor Song Joong-ki, who garnered much popularity while on the 2012 drama “The Innocent Man,” chose to play the role of a soldier in the first drama he’s done since completing his two-year military service. The melodramatic story about a lieutenant named Yoo Si-jin and a doctor named Kang Mo-yeon (played by actress Song Hye-kyo) has become one of the hottest shows in Korea.

What made this drama more charming than most are the catchy lines Song normally drops. He uses phrases many military men are encouraged to use while in service, and he had no problem picking it up as he had used such language himself up until recently.

“These lines can’t be used in real life, but many viewers seem to relate,” Song said when he met with the media last week to talk more about the drama. “It’s some sort of fantasy that people can agree with.” 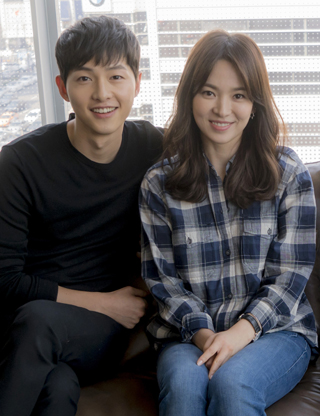 The lead actors on KBS2 drama “Descendants of the Sun” are Song Joong-ki, left, and Song Hye-kyo. [JOONGANG ILBO]

For instance, in one scene, instead of speaking directly when he wanted actress Song to stop doing what she was doing, he was more oblique about the matter. Rather than saying, “Hey you, get out of here,” or something to that effect, he said, “Ms. Kang will be leaving the room now.”

Here, many may wonder if Song, who was just discharged from his military duty, really wanted to be part of this drama and relive his daily routine of the past two years. One can imagine that for many, re-enlisting would be their greatest nightmare. But the actor, when asked about this, said he was waiting for such a question.

“I didn’t really care much,” he said. “I think because I got to complete the service and come back in good health, I was able to do a role like this.” He also added that he takes the role quite seriously because issues regarding the military can be rather sensitive for many Korean men.

While the use of lesser-known military terminology initially captured the audience’s attention, Song said there were much more important things for him to practice than memorizing these special lines. Indeed, for him, the crucial scenes are the ones when he doesn’t have any lines at all.

“I prioritize showing emotions or facial expressions when Kang acts her lines,” said actor Song, adding that the director also agreed with him on this approach. “Even during filming, the direction I got was to stare at her but not overly do it and make it too much of it.”

Although he said he didn’t try to intentionally create some new character, critics have said that he has developed a more masculine persona, as he was previously known more for his “pretty face.”

“I didn’t have any thirst for changing characters,” Song said. “One thing I did want, however, was to get back to work and film while in the military base.”

Because the drama depicts stories happening in the military, some have pointed out that the drama is, at times, too militaristic or attempts to instill patriotic fervor. However, Song welcomes all talk on the piece he is working in, as those opinions make the drama more interesting.

“The drama is public art, and I think if everybody loves it, that drama becomes something less charming,” Song said. “While I welcome criticism, I would like to tell those giving negative reviews to watch the drama until the end so that they can see the deeper meaning the drama is trying to show.”

Song added that he is confident that more people will become fans of the drama and that’s why he chose to do this work.

His counterpart, Song Hye-kyo, said the character Song has is about 80 percent synced with that of the fictional character Yoo. She said Song is more considerate, while not so verbally entertaining.

“Based on what I have noticed in the past six months of filming, Song is deep person, though he doesn’t talk as smoothly as Yoo does,” the actress said. “We do some casual bantering in between filming, or play pranks, but I’m the one who always wins in the end.”