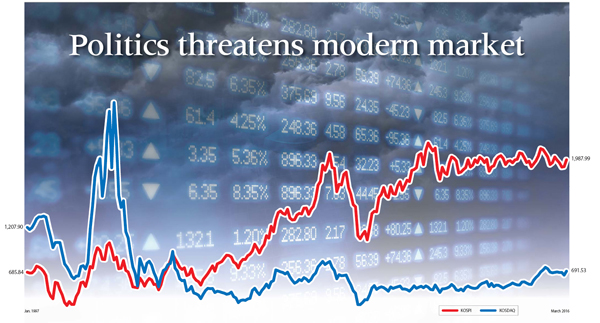 A plan by the Korea Exchange to overhaul its structure into a holding company is on the verge of collapse amid a political squabble over the location of its headquarters.

The National Assembly placed the reform bill on the table as it began its March regular sessions last Friday, but has yet to achieve meaningful progress as lawmakers are busy debating nominations for the April general election. The bill automatically dies if it fails to pass the 19th National Assembly.

The Korea Exchange was a public enterprise from 2009 to 2014, and was privatized in January 2015 as part of the Park Geun-hye administration’s financial reform initiative to boost the bourse operator’s competitiveness by allowing easier business diversification and restructuring.

However, it still needs the local Capital Market Act to be revised to allow multiple stock exchanges to exist in Korea and to permit the sole current exchange to divide itself into a holding company and multiple subsidiaries.

Political conflict has arisen from a single line in the bill, which stipulates that the new holding company’s headquarters be located in Busan.

The ruling Saenuri party, which has a strong political base in Busan and South Gyeongsang, wants to keep the line in the bill to win votes from the region during the upcoming general election. The opposition parties say the Saenuri Party should not use the bill as a vote-winning strategy.

The Korea Exchange headquarters moved to Busan in 2005, as previous administrations planned to develop the nation’s second-largest city into Northeast Asia’s financial hub.

Busan residents have insisted that the office is kept there to revitalize the city’s economy, though most financial companies are still operating in Yeouido or Euljiro, located in southwestern and central Seoul, respectively.

Kim Moo-sung, chairman of the ruling Saenuri Party, promised that “the ruling party [would] do its best to eliminate legal barriers in establishing a holding company for the Korea Exchange at the April meeting of the National Assembly before the term of the 19th National Assembly comes to an end” at the market operator’s 60th anniversary ceremony on March 3.

His plan is to pass the bill by holding a provisional session later in April, before the 19th Assembly’s term ends in May, he said.

Rep. Kim Ki-sik of the opposition Minjoo Party of Korea said, “I would say Busan should elect at least a single liberal lawmaker in the upcoming general election if they want the opposition parties to agree to the bill.”

Why did the government and the bourse operator call for restructuring?

The Korea Exchange wants to divide all its bourses into individual affiliates, each of which will find new business opportunities with foreign counterpart bourses and push them independently faster and more efficiently.

It eventually hopes to expand the size of all bourses by getting more foreign and local companies to go public here in Korea, and to raise profitability by exporting financial IT services to overseas stock exchanges.

Currently, four bourses, including the primary Kospi, the secondary Kosdaq, the derivatives market and the new Konex for start-ups, operate under five business divisions: the Kospi, Kosdaq, Derivatives, Market Oversight Committee, and the IT and Administration divisions.

With the bill, the Korea Exchange aims to rely less on the Kospi market by rearranging the five business divisions into six affiliates: Kospi, Kosdaq (which includes Konex), Derivatives, Koscom (a financial transaction IT service company), the Market Oversight Committee (to be a nonprofit organization) and establish a separate stock clearings company. They are supposed to operate under the final holding company, the Korea Exchange.

After corporate governance becomes more transparent under a holding company, the Korea Exchange plans to push an initial public offering by June 2017 to raise enough cash in the first couple of years to expand affiliates’ businesses with foreign stock exchanges via mergers and acquisitions or share transfers.

The reform plan focuses on business diversification by promoting IT and trading infrastructure businesses and smaller bourses.

“As global stock exchanges are competing against each other to grab more liquidity across the border by gearing themselves with cutting-edge financial IT solutions and services, the Korea Exchange wants to be a competent player and attract liquidity into our bourses,” CEO Choi Kyung-soo said.

As part of the growth plan, the market operator has already received orders from 4 financial IT service construction projects in seven countries, including Vietnam, the Philippines and Cambodia, and is currently in discussions to modernize the stock exchange system in Iran.

The Korea Exchange planned to strengthen the Kosdaq and Konex markets by enabling securities-based crowdfunding to help start-ups and allow the bourses to develop and list their own indices such as the gold and gas trading market.

“The past merger of Kospi and Kosdaq ended up boosting only the primary market, while the Kosdaq remained the secondary market,” the Financial Services Commission (FSC) explained last July. “If they operate separately under a holding company, the smaller bourses will be able to grow in balance.”

Rep. Kim of the Minjoo Party, who is also a member of the parliamentary Policy Committee, said that the separate operation had already proved inefficient.

“The restructuring this time is like contradicting ourselves, because past governments have already concluded it is more efficient to operate different bourses under one company,” Kim said.

The government decided to merge the separate Kospi, Kosdaq and derivatives markets in 2005 to reduce operating costs. This time, the six affiliates will work under one electronic system to reduce costs, and only the decision-making and governance will remain separate, the FSC explained.

Rep. Shin Kyung-min, another Minjoo member, said last week at a press conference that he opposes the bill, as he does not feel it is right for the bill to specify the location of the future headquarters.

He said the headquarters should be in Seoul, as nearly 82 percent of securities exchanges happen in Seoul and all the stock and futures brokerages are located in the capital.

The Korea Exchange is not alone in trying to transfer its governance structure into a holding company and have it listed in the capital market via an initial public offering.

Nearly 82 percent of stock exchanges in the American continent have gone public, while 44 percent have done the same in the Asia-Pacific and 37 percent in Europe and Africa, according to a Hanwha Investment & Securities report based on data at the end of 2012.

The trend is continuing, as Deutsche Borse, operator of the German Frankfurt Stock Exchange, and the London Stock Exchange reached an agreement to merge on Wednesday, to jointly establish a new holding company called UK TopCo and merge exchange-traded funds and derivatives markets.

With the Wednesday deal, the global stock exchange industry will now be led by four giant exchanges, including the new UK TopCo, ICE Group, CME Group and the Hong Kong Exchange, the Nihon Keizai Shimbun wrote in an article on Thursday.

It added that enlarging the body via mergers and acquisitions is a trend in the global stock exchange industry, and Asia may end up less competent as it has already fallen behind the Western world in M&A initiatives.

Analysts say transferring into a holding company and going for an initial public offering is the most efficient way to collaborate with global exchanges via mergers and acquisitions and joint businesses.

Transferring the Korea Exchange into a holding company is an inevitable step as a prerequisite before the initial public offering, which helps the company raise money easily to strengthen the IT business, Hwang said. He added that it also helps attract foreign investors and M&As with foreign exchanges, as IPOs make a company seem more reliable.

Hwang also emphasized the holding company system will help the Korea Exchange adapt to increasing competition in the future.

“As some Korean brokerages are known to be preparing a launch of an alternative exchange, the Korea Exchange can respond more quickly under a holding system than the current system,” Hwang said. “Even if there is no competition domestically, the Korea Exchange will face challenges from foreign counterparts, attracting liquidity and company IPOs.”

Local brokerage firms say the restructuring will help enhance the Korea Exchange’s balance sheets, which started worsening in 2012 when the government ordered the market operator to shave trading fees.

Of the existing four bourses, only three - the Kospi, Kosdaq and derivatives market - generate revenue mostly from transaction and listing fees. The primary and secondary markets are responsible for more than 50 percent of the total revenue, mostly coming from stocks and derivatives trading transaction fees and listing fees. Only about 19 percent of the Korea Exchange’s income comes from non-fee businesses such as selling financial information and clearing services, according to KCMI data.