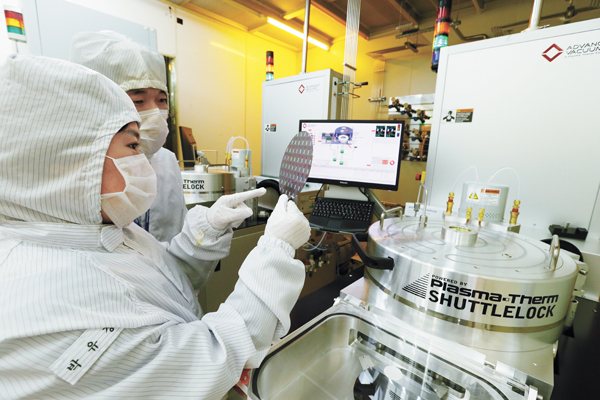 Researchers at the Seoul National University Inter-University Semiconductor Research Center examine a semiconductor wafer in January. Unlike other research centers operated under universities, the entire chip-making process is simulated inside the facility. [SHIN IN-SEOP]

Korea’s semiconductor industry has typically been strong, but past performance is no indicator of future success in a rapidly changing world. That’s why the nation’s academics and business leaders are working to become more flexible and adapt to unforeseen challenges.


At the Seoul National University Inter-University Semiconductor Research Center in Gwanak District, southern Seoul, in January, about 10 researchers were engrossed in work on the etching process, in which unnecessary layers are chemically removed from the surface of a wafer during manufacturing.

The center is the nation’s top public semiconductor research facility. It is equipped to run through and study all aspects of the actual semiconductor manufacturing process.

It was this research team who developed the semiconductor that is 1,000 times faster, 1.5 times larger in capacity and even cheaper than existing NAND flash memory chips, which is now used in many USB flash drives and smartphone or digital camera memory cards. The team’s next goal is finding new materials for semiconductors that could replace silicon. Semiconductors are currently reliant on materials like silicon, germanium and gallium arsenide.

In the private sector, SK Hynix currently operates the single largest semiconductor manufacturing facility in the world, the spaceship-like M14 factory in Icheon, Gyeonggi. Completed last year, the facility is 77 meters (253 feet) high and 7.5 times the size of a soccer field. Inside, two semiconductor production facilities operate near each other, each several stories high.

In 2012, while most of the semiconductor companies were cutting back on investment, SK Hynix expanded its investment into facilities by 10 percent compared to a year before, up to 3.85 trillion won ($3.31 billion). Thanks to the winning move, the company increased its global ranking five places, from eighth to third, in 2011, according to IHS data. 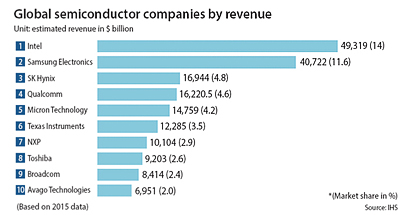 But both the public and private sectors have a long way to go before a new growth engine for the industry is created.

Post-silicon directly refers to this search for new materials, but it has also come to embody efforts to improve the performance and computing capabilities of individual chips.

It’s a question of when, not if, these discoveries will be made, and when they do, it could radically change the landscape of the market currently valued at $341 billion.

Since the battle for development of post-silicon has just begun, both countries and companies are starting from the same place.

“When it comes to finding new materials, you could say that a big research gap has yet to emerge between countries,” Hwang said. “Since country-level competition is still in its infancy, [Korea] should concentrate its research efforts early on and lead competition in the material sector.”

Graphene, which was once seen as the next best material, has already been found to be inappropriate for mass production of semiconductors.

Competition is also fierce in the broader post-silicon sector, which includes technological enhancement. Last July, the world’s No. 1 semiconductor manufacturer, Intel, and No. 5 Micron Technology startled the world by introducing “3D Xpoint,” a next-generation memory technology.

3D XPoint combines the advantages of existing dynamic random-access memory (DRAM) and NAND flash memory. Its processing speed, which was seen as a weakness of NAND, is about 1,000 times faster, and its data capacity is 10 times larger than that of DRAM.

“3D XPoint will completely change the dynamics of the memory and storage solution sector,” said Rob Crooke, senior vice president and general manager of the non-volatile memory solutions group at Intel. Actual mass production is scheduled for this year.

Post-silicon research is likely to shake up the structure of the market. Companies or countries that used to dominate one particular area of the semiconductor industry are no longer secure in their leadership.

For instance, while chipmakers from Korea and Japan have been leaders in memory semiconductors, companies from the United States like Intel and HP, which have traditionally been stronger in system semiconductors, have been rapidly gaining ground.

The situation is further complicated by countries like China entering the market for the first time.

The Chinese government set up the National Integrated Circuit (IC) Industry Investment Fund in 2014 as part of its plans to strengthen IC development in the country. China had raised a total 119 billion yuan ($18.5 billion) for the fund. Last June, it proposed plans to invest 1 trillion yuan in the semiconductor industry over the next 10 years. 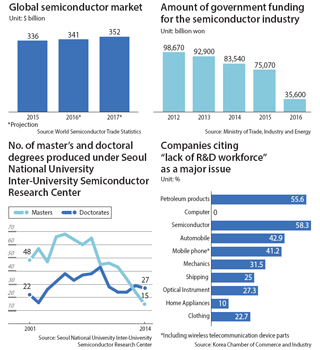 Korean chipmakers are also preparing for the post-silicon era. Their basic strategy is to best the competition by improving their ability to mass-produce already-existing chips.

Samsung Electronics began construction of a semiconductor manufacturing facility in Pyeongtaek, Gyeonggi, last May, with the goal of holding the largest production capacity in the world. It plans to invest 15.6 trillion won in the construction of the space that will total 2.38 million square meters, or 400 times the size of a football pitch.

SK Hynix will also spend 6 trillion won this year alone to continue development and mass production of 2z and 1x-nano DRAM and 3D NAND flash, which are considered industry-leading products.

“We are at a time where threat and opportunity coexist,” said Kim Hyung-soo, who works on SK Hynix’s new memory process development team.

“It seems as though we are two to three years ahead of China in the memory chip field, but while China is walking on an already paved path, we [Korea] have to blaze a completely new trail, making it difficult for us to tell who is ahead and by exactly how much.”