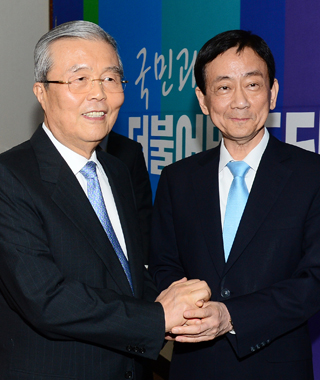 Chin Young, right, holds hands with Kim Chong-in, the interim leader of the Minjoo Party of Korea, at the press conference in the Kim’s office in the National Assembly on Sunday. [NEWSIS]

Chin Young, 65, a three-term lawmaker who left the ruling Saenuri Party on Thursday after being denied a ticket in April’s general election, joined the main opposition Minjoo Party of Korea on Sunday.

“I cherish true party politics, not party factionalism masterminded by a certain person,” Chin said at the press conference. “I join The Minjoo Party to fight against authoritarianism to restore democracy.

Political analysts interpreted Chin’s comment as a denunciation of President Park Geun-hye pulling strings to make sure her loyalists were given nominations for next month’s election.

Chin claimed that his failure to be given a nomination was a “bitter retaliation” for having challenged the president.

After Chin was denied a nomination on Tuesday, he said, “I was bitterly retaliated against though all I did was to keep my promises to the people, to work for the people.”

“I thank [Chin Young] for joining the Minjoo to help bring about a mature true democracy after he was forced to leave the [Saenuri] party as a scapegoat,” interim leader Kim at the press conference.

“I doubt whether the ruling party functions as a true political party when I view its recent behavior,” he said.

Kim and Chin hail from the same region, North Jeolla, and have maintained a close relationship since 2012 when Kim was chairman of the People’s Happiness Promotion Committee of Park Geun-hye’s presidential campaign and Chin was deputy chairman.

“I have listened to Kim’s thoughts a lot and I think his ideas will be appropriate for our country’s direction and the spirit of the times,” said Chin. “I thought I should help him produce welfare policies for our country.”

Chin, the first health and welfare minister in the cabinet of President Park Geun-hye, is the second veteran of the Park administration to join the main opposition party. Cho Eung-cheon, former presidential secretary for civil service discipline accused of leaking confidential presidential reports, was the first. Cho was given the Minjoo’s ticket for Namyangju A District in Gyeonggi Province for the April 13 general election.

Saenuri spokesman Lee Jang-woo lashed out at Chin for his defection, saying, “It is the politics of betrayal as Chin, who reaped all kinds of benefits from the Saenuri Party and the Park administration, joins an opposition party that has hampered any improvement of working class livelihoods.”