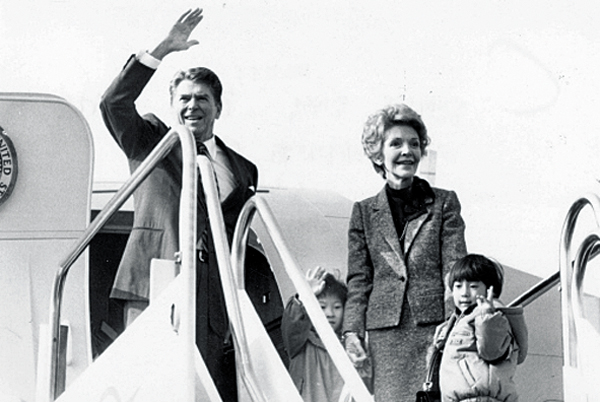 Brett Halvorson, far right, holds Nancy Reagan’s hand as he boards Air Force One in Korea in November 1983 for a flight to America. [JOONGANG PHOTO]

It was five in the morning when Brett Halvorson received an email from a reporter in New York asking whether he could fill out an urgent questionnaire about his relationship with a woman he had known for 33 years, yet met very few times, the last one being nine years ago.

Puzzled, and with a creeping suspicion, Halvorson hopped online and found breaking news reports that the woman, Nancy Reagan, the wife of 40th U.S. President Ronald Reagan, had died the day before on March 6.

“It just felt very sad,” Halvorson, 37, recalls. “With a lot of people’s deaths, I think they get remembered more. Personally, it was a time of reflection as I thought about our reunions and read through almost all the articles that featured both of us.”

A U.S. citizen born in Korea and later adopted by an American family, Halvorson’s memories with the first lady dates back to 1983, during her visit to Korea with President Ronald Reagan. While in Seoul, Nancy Reagan, who died this month at age 94, was invited to visit a medical institute for children with heart defects, where she met with two critically ill children: a 7-year-old named Ahn Ji-sook and a 4-year-old named Lee Kil-woo, who would later change his name to Brett.

Both children were scheduled for heart surgery in New York through the Gift of Life program, a medical initiative sponsored by Long Island’s Rotary International District 725.

Gift of Life sponsors had written a letter to the White House asking whether they could bring some kids back to the United States for a surgical procedure that involved closing a hole between the lower chambers of the heart. Reagan agreed to bring the children to the United States on Air Force One, after which they received open heart surgeries at St. Francis Hospital, one of the nation’s best sites for cardiac surgery.

Halvorson recalls very little about his first air flight but, he confides, the warmth and hospitality of Nancy Reagan still conjures an emotional response.

“I do remember this grandmother who was very kind and very warm. Faces, I can’t remember at all, but I do recall the moment the airplane took off; my back was faced to the front of the plane and I lunged forward,” he says, laughing.

Halvorson later learned he wasn’t initially the boy chosen for the trip, according to a friend of Hariott Hodges, an American woman in Seoul who connected Halvorson with Rotary.

“I heard I was swapped,” he says. “The boy who was supposed to go with Mrs. Reagan was ill-tempered and cried a lot. I guess I was calmer.”

His reunion with Reagan came soon after the surgery, when she personally paid a visit to the hospital carrying gift-wrapped Cabbage Patch dolls in her slender arms. Halvorson says that image is the only thing he can remember.

But a New York Times reporter vividly described the moment in a Dec. 20, 1983, article titled “Mrs. Reagan pays a call on children in hospital,” which details how Reagan and the two children “hugged and kissed on the floor at the foot of the Christmas tree as they unwrapped shiny packages tied with silver-and-gold ribbon.” 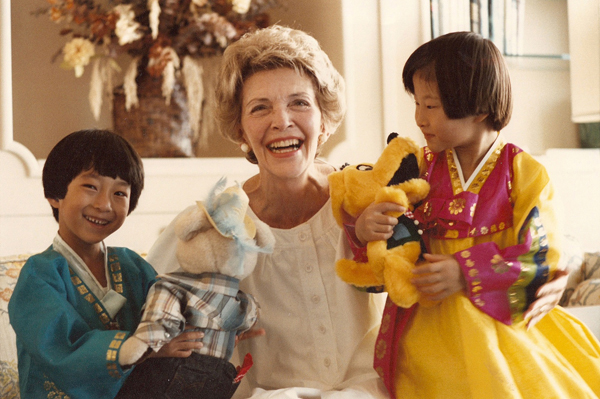 Halvorson, left, and a Korean girl who went with him to the U.S. for heart surgery spend time with Nancy Reagan after their flight on Air Force One in 1983. [BRETT HALVORSON]

The article goes on to say Halvorson had prepared a gift of his own, which read, “To My Hal Man Nee, I love you,” addressing the first lady with the Korean term for grandmother.

After surgery, Halvorson returned to Korea but was adopted by an American family several months later when his biological parents decided he “would have a better life” in the United States due to his poor health conditions and the family’s inability to finance his medical needs. As fate would have it, he was adopted by the same family as Ahn, the little girl who had flown to America with him. She later took the name Diana.

Halvorson grew up in Arizona until 1989, when he moved to Seattle following his adopted parents’ divorce. There, he worked as a banker for several years, then went into the insurance business as a broker.

It was in 2004, after President Ronald Reagan passed away, that Halvorson began combing over his memories of the first lady once more.

After several failed attempts trying to Google her, he was finally able to reach her personal assistant in 2007 through the Reagan Presidential Library and Museum in California. They later exchanged emails, their first form of contact in 24 years. Months later, the two were physically reunited when Halvorson was invited to the library to meet Reagan during a ceremony celebrating the opening of a new area within the museum.

“The first thing I said to her was ‘thank you for saving my life,’” says Halvorson, with tears in his eyes. She replied, “Wow, you’re so big now!” 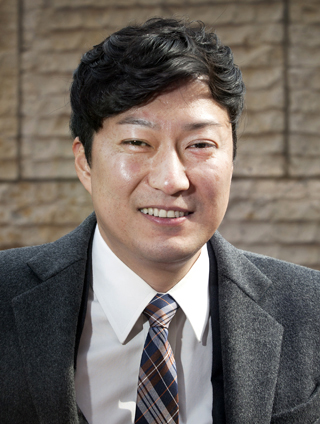 Halvorson, 37, in an interview in Mapo District, Seoul, on Tuesday. [PARK SANG-MOON]

Halvorson points out that the personal significance of that day goes far beyond his reunion with the woman who saved his life; it also put him back in touch with his biological parents. After that day, his aunt, who had immigrated to America, read an article about his meeting in the local news and contacted him. Weeks later, he was on a plane to Korea to meet his biological parents for the first time since their separation.

“When I met my Korean family, I asked them why,” he says, trailing off. “It was confirmed that they thought it would be better for me to live in America, since they were poor and Korea was a developing country at the time. They did it out of love, and I truly believe that.”

After retuning to the United States, Halvorson got in touch with the Gift of Life representatives who had sponsored his surgery, and took up work as the group’s spokesman and ambassador, quitting his job as an insurance broker to embark on national tours raising awareness about heart problems in young children and collecting charity for their surgeries.

From 2008 to 2011, Halvorson would frequently visit Korea and network with local Rotary club members, many of whom were operating their own domestic Gift of Life projects.

In 2009, he raised enough money to bring a 10-year-old girl from Uganda to Yonsei University’s Severance Hospital in Seoul for a heart surgery. The following year, he brought two more girls from El Salvador, aged 8 and 15, to Gachon University Gil Hospital in Incheon.

Overall, Halvorson has personally arranged the surgeries of around 10 children. He is currently writing a biography to raise awareness of his global endeavors and inspire the rest of the world to action. He has yet to come up with a title.

Looking back, Halvorson believes Reagan’s kindness brought much needed attention to the issue of children suffering from heart problems. It sparked media attention and boosted many Rotary clubs around the world to initiate similar programs of their own. Since 1975, the Gift of Life has helped more than 18,000 children from 71 different countries worldwide.

In 2011, to make up for the lost time with his biological family, Halvorson moved to Korea and is now freelancing as an English teacher alongside his role at the Gift of Life.

“If I were to meet Mrs. Reagan again,” Halvorson says, “I would tell her that what you did for me inspired me to help others, because without you, I wouldn’t be alive right now.”

He added, “I think she was an inspiration not only for me but for so many others.”