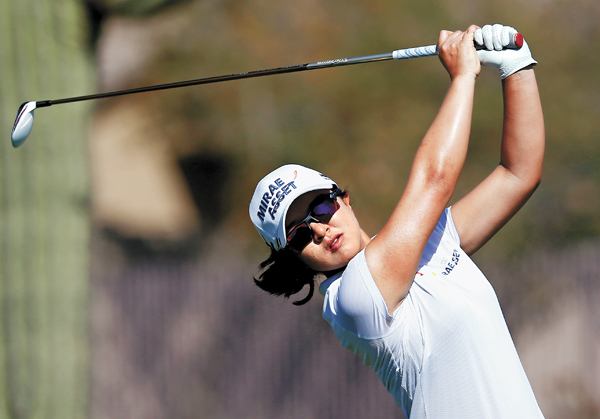 Korean golfer Kim Sei-young tees off in the final round of the JTBC Founders Cup yesterday in Arizona. Kim tied the LPGA record of 27-under 261 set by Swedish golfer Annika Sorenstam in 2001 to win the tournament after closing the final round 10-under 62. Yesterday’s win marks Kim’s fourth LPGA title in her career. [AP/NEWSIS]

In addition to her win, Kim also matched Swedish golfer Annika Sorenstam’s LPGA record with 27-under 261 after closing the fourth round at 10-under 62. Sorenstam shot the lowest score in LPGA history on March 2001 at the Standard Register Ping at Moon Valley Country Club in Phoenix, Arizona.

Kim went into the fourth round yesterday after tying for second in the third round at 17-under 199. In the final round, however, Kim carded one eagle in the 11th hole and eight birdies to card 10-under and finish the tournament at 27-under par. Kim’s eight birdies include ones from 15th and 16th hole. Kim missed her chance of setting a new LPGA record over Sorenstam’s when she couldn’t grab another birdie in the 18th hole, as her birdie attempt on the par-4 slipped left. World No.1 Lydia Ko of New Zealand, who finished second in the tournament after Kim, marked 7-under 65 in the fourth round to finish the event at 22-under 266, five shots behind Kim.

Kim’s 62 set score in the fourth round is her lowest in a single round, and is also the single round record for the Founders Cup. Her previous lowest single round score was 65, which she marked six times in 2015. Her victory yesterday is also her first win in a tournament that did not take place on an island. Her past three wins come from Bahamas, Hawaii and Hainan Island in China.

“Yeah. It’s a dream come true,” Kim told the media according to the LPGA.com. “Today’s score 10-under is my best score ever, ever. So I didn’t know that after the last putt, but after I check the scorecard, I asked to Paul, my caddy, did I shoot 10-under? He said, yeah. Oh, my God. That’s amazing. Yeah. Dream come true. It feels so great now.”

Ji, who was ranked first after the third round, finished the tour at 19-under 269 to tie for fourth with Stacy Lewis, Paula Creamer and Megan Khang of the United States and Brooke Henderson of Canada. Ji had three birdies on the final day but her hope to win her first LPGA title since 2009 slipped away as her two bogeys in the 9th and 16th hole forced her to concede the first place position to Kim.

Jang Ha-na, who’s had a good start this season with two wins under her belt already after the HSBC Women’s Championship in Singapore on March 6, placed 13th along with six others. Jang carded one eagle, six birdies and one bogey in the final round to finish the tournament 17-under 271. Lee Mi-hyang, who took the lead in the round one, finished 13th alongside Jang. Although she set the new Founders Cup 18-hole record in the first round on Friday shooting 10-under 62, Lee quickly climbed down the ranking after the first day. Lee shot one eagle, three birdies and one bogey to score 4-under 68 on the fourth round to aggregate 17-under. Kim matched Lee’s 62 set single round record from Friday in the fourth round.

LPGA and World Golf Hall of Famer Pak Se-ri, who declared her retirement after this season, finished 42nd in her first LPGA tournament in nine months. Pak also had a decent start when she shot 3-under on the first day. Pak had one eagle, four birdies and four bogeys to shoot 2-under 70 in the fourth round and wrap up the event at 12-under 276.

Kim, who was also the 2015 LPGA Tour rookie of the year, will jump from the seventh to the fifth in the world ranking, placing her second in the qualifiers to join Korea’s golf team for the Rio Olympics.