What to do with China's trash? Burn it

What to do with China's trash? Burn it 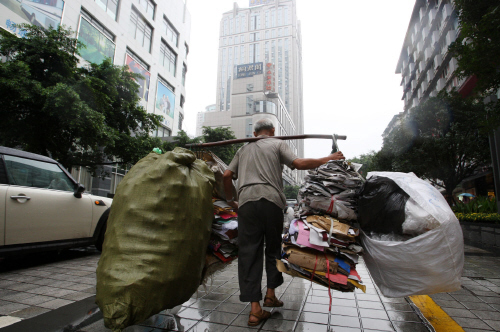 A Chinese citizen carries wastes for recycle in downtown Chongquing.

Shenzhen, China's high-tech boomtown, sprung a surprise on its 12 million-plus residents this week. Construction has begun on three giant, state-of-the-art incinerators to handle the heaving tide of trash that the city tosses out daily. One of the mega-burners — resembling an American-style football dome — will be the world's largest waste-to-energy plant when it opens in 2018.

Far from being ominous, however, that giant burner is good news for Shenzhen — and for the environment.
Thirty years ago, with middle-class consumers still rare, China didn't have to contend with the large volume of trash that affluent societies generate. But like so much else in China, garbage has changed, and in a big way. Today, China throws out more stuff by weight than the U.S., making it the world's biggest trash generator. By 2025, the World Bank estimates it will toss out 1.4 million tons of garbage a day — nearly tripling its current rate.

The trouble is that China already generates far more trash than it can safely handle. Last year, scientists determined that China was the largest contributor to the millions of tons of plastics that enter the ocean every year, via mismanaged (or not managed) waste dumps. Drive to the outskirts of any Chinese city and you'll run into a ring of informal landfills emanating all kinds of un-recyclable stench.

Shenzhen might be ground zero for this problem. In 1979, the city generated 50 tons of solid waste a day. Now, it's generating 15,000 tons a day. Its trash heap is growing by 6.1 percent annually. That growth comes with risks, and not just the environmental kind: In December, dozens of people were killed when an unlicensed landfill for construction debris collapsed.

Ideally, Shenzhen would recycle its problems away. For decades, Chinese scrap peddlers combed urban streets for anything reusable, and made a remarkable contribution to keeping cities clean. But the ranks of migrant laborers who flocked to that kind of work are thinning. And city governments, with an eye on property values, are pushing out the small-time recycling markets that enabled the trade. More pertinently, in a slowing economy, manufacturers simply can't use everything that's being recycled: The world is over-supplied in commodities, and that goes for bottles and cans, too.

Landfilling still has its place, but China's drive to urbanize means that today's remote garbage dump is tomorrow's urban nuisance. That's what happened in Shenzhen, where one major landfill has been expanded six times and now abuts newly built apartment towers, where residents understandably complain about the smell. The central government, meanwhile, is increasingly concerned about reducing soil pollution, preserving arable land and ensuring long-term food security. Landfills don't help any of those goals.

That leaves incineration. In recent years, incinerators have caused protests and riots among Chinese concerned about their health and property values. They have a point: Historically, China's trash incinerators have been environmentally hazardous. But lately, cities such as Shanghai have been trying to emulate (and import) the advanced and environmentally secure waste-to-energy incinerators that Europe and Japan rely on. The projects underway in Shenzhen follow that model. According to the local government, they'll actually exceed European Union emission standards.

That's worth cheering. But it shouldn't be the end of the discussion. For incineration to gain wider acceptance, local governments will have to be more transparent. Waiting to announce an incinerator project until after construction has started — as Shenzhen did — doesn't help. To ensure that incineration doesn't undermine recycling, it should be paired with so-called pay-to-throw programs, in which residents are taxed on the volume of trash they're tossing. Finally, the government should use its considerable administrative power to encourage alternatives to the single-use, unrecyclable packaging that's currently clogging China's landfills and waterways.

There are no easy ways to take out China's trash problem. But burning is a necessary step to addressing it.