Soundtrack of Seoul was created in Nakwon

Soundtrack of Seoul was created in Nakwon

The 48-year old Nakwon complex offers various kinds of musical instruments. Recently, the complex has opened cafes on the second floor and scheduled outdoor performances on the fourth. [LIM HYUN-DONG]

Most people have taken a stab at playing a musical instrument at some point in their lives. It provides happy memories, even for those who didn’t get very far and abandoned the instrument for other hobbies.

For Koreans, many of those memories involve the Nakwon instrument complex, the country’s biggest musical instrument market. For almost 50 years, the complex in Jongno District, central Seoul, has been synonymous with instruments and other musical accessories.

Even today, the complex is a paradise for musicians. Every kind of music-related product is available, from a cheap triangle for 1,000 won ($0.85) to a special acoustic guitar made for guitarist Eric Clapton, valued above ten million won.

In the boom period of the 1980s, the complex made the Guinness Book of World Records. It was the world’s largest musical instrument market, boasting more than 300 stores.

The complex was built in the middle of Jongno District in 1968 after a four-lane road was constructed. By the standards of the time, mixing of functions in the complex was unconventional. Today it seems odd to have musical instruments stores on the second and third floors, a theater on the fourth, offices on the fifth, and apartments occupying the sixth to fifteenth floors.

At the entrance, there is a signboard written in hangul reading Nakwon Building. On the wall around the courtyard, a big picture of a mother hugging a child is carved, which was done by a worker during construction of the building.

Originally, the Nakwon complex was not a musical instrument market. There were a few instrument stores along with clothes shops, a bowling alley, pool halls and cabarets. The customers of the instrument stores were mostly musicians working in the American army and singers. 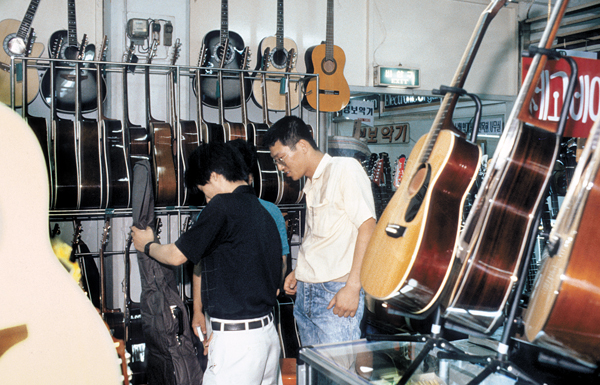 A store selling various kinds of guitars in the 1980s, the heyday of the Nakwon complex. [JOONGANG ILBO]

In 1979, the reconstruction of the wall of Pagoda Park, in the present day Tapgol Park, began. Around that time, stores selling pianos moved into the Nakwon Complex. Then, in 1983, the Pagoda Arcade was torn down and the Nakwon complex became dedicated to musical instruments. After the government lifted nighttime curfews in 1982, the boom got more frenetic.

During the 1980s, the complex was also a kind of employment center. Musicians waited there to be hired by cabarets.

“In the 1960s to ‘70s, there were no instrument repair shops,” said Ji Byeong-ok, owner of Singwang Musical Instrument Store. “If you needed repairs, especially for wind instruments, you went to the jewelry shop in Jongno 3(sam)-ga.”

In the mid 1990s, the Nakwon complex began to go into decline, since karaoke rooms opened and live music went out of style. During the Asian financial crisis in 1998, many merchants closed their businesses.

Then, the complex saw a revival. The number of stores selling equipment for DJing and for home recording expanded.

Recently, many people come to the complex to buy accordions and ukuleles. Senior citizens are particularly fond of accordions. Cosmos Musical Instrument Store opened a second branch on the third floor that mainly sells accordions and related products.

“Elderly people try to learn the accordions because it has a reputation for being a scientific instrument that will help prevent dementia,” Ko Young-sik, the executive of the Cosmos, said. “Also it is easy to carry around on mountain walks and picnics.”

The influence of the elderly can be seen in the complex’s theater. In 1969, the theater was opened under the name “Huriwood,” borrowing the Korean pronunciation of Hollywood. In 2009, its name was changed to Silver Theater, because of its clientele of seniors. 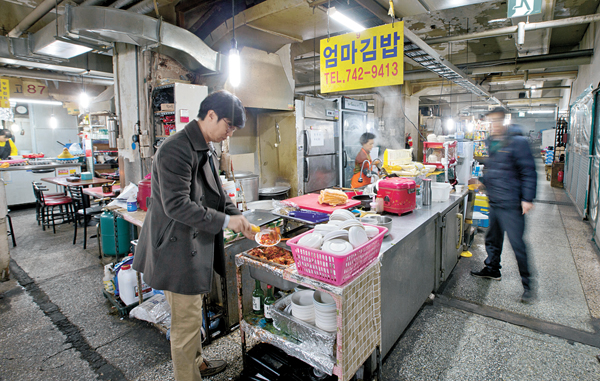 In the basement, there are many small and cheap restaurants. One of them is Mom’s Gimpbap, which sells noodles and gimbap (Korean rice rolls), which only cost 2,000 won. [LIM HYUN-DONG]

The basement is home to over 100 small restaurants, markets and butcher shops.

And the Nakwon complex continues to evolve. On the fourth floor, there is now an outdoor stage with 100 seats. From March 26, performances will be held twice a month, mostly of acoustic bands.

There are also free classes for singing and learning musical instruments.

“I hope many people will enjoy music, even though they don’t buy instruments,” said Yoo Gang-ho, an executive of the Nakwon complex. “Feel free to come and enjoy the complex!”

More information on performances and events can be found on the official homepage: enakwon.com.