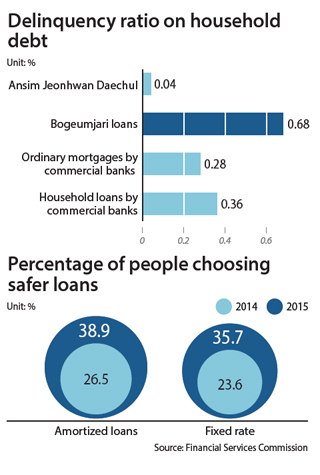 An increasing percentage of households deciding to pay back loans in installments without a grace period is helping improve the country’s household debt problem, according to a recent analysis by the Financial Services Commission.

The financial authority analyzed the effects of the Ansim Jeonhwan Daechul, a refinancing program to convert high-interest floating rate mortgages to lower fixed rate government-backed loans, which was launched a year ago, and found more consumers are choosing mortgages without a grace period with a renewed mindset about paying back loans.

In March and April of last year, a total of 31.7 trillion won ($27 billion) was provided as mortgages with fixed interest rates between 2.55 and 2.6 percent with the backing of the state-run Korea Housing Finance Corporation.

The fixed-rate refinancing program was based on the government’s principle that financial borrowings should be made at an affordable level and amortization is necessary.

After the introduction of the refinancing program, about 77 percent of those who borrowed mortgages in February of this year chose amortization without a grace period, the commission said. The percentage was about 20 percent in 2014, and jumped to 62 percent last year.

“Practices of borrowing for mortgages have started to change,” said Kwon Dae-young, director of the financial policy bureau at the FSC. “More people are switching from floating rates and straight loans to fixed rates and amortization.”

Following the government’s guidelines, borrowers are even avoiding grace periods in which they can repay interest only and postpone redemption of the principal, the official added.

The delinquency ratio for the government-led mortgage program is also remarkably low compared to other programs, the analysis showed.

As of late February, the delinquency ratio for the program stood at 0.04 percent, it said.

“It is very low compared to that of ordinary mortgages or loans provided by commercial banks,” Kwon said.

Such changing perceptions about loans is helping improve the structure of accrued household debt, experts say.

“The government program has served as a catalyst for changing the general perception about debt,” said Moon Young-bae, head of CB Research Institute of NICE Credit Information Service.

Moody’s, one of three leading international credit rating agencies, said the refinancing program will have a positive impact on the country’s credit level as it helps reduce risks of household debt.

“In such a small, open economy, the rising percentage of fixed-rate loans will help lower risks stemming from changing interest rates,” said Kim Jung-sik, an economics professor at Yonsei University.

As the percentage of loans based on the amortization principle rose from 26.5 percent in 2014 to 38.9 percent as of the end of 2015, the government estimates that it is possible to see gradual decreases in the total amount of household debt.

“If the amortization percentage keeps increasing, the total debt amount would decline by 7.5 trillion won every year,” the report said. “Over the next 25 years, outstanding bank mortgages would decrease 186 trillion won.”