FSS tells banks to get rid of their bad debt

FSS tells banks to get rid of their bad debt 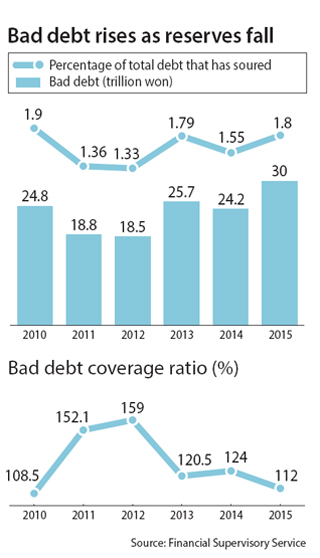 Financial Supervisory Service (FSS) Gov. Zhin Woong-seob, on Monday warned local banks to quickly rid themselves of the bad debt they have lent to insolvent corporate borrowers, as data has showed the banks’ financial soundness has worsened.

“The ratio of bad loans posted a five-year high last year, while the bad debt coverage ratio hit a five-year low. This was mainly because banks were too slow in disposing of bad debt but allowed the volume of bad debt to rise quickly,” Zhin told FSS senior executives at a meeting held at the financial supervisor’s headquarters in Yeouido, southwestern Seoul, on Monday, where he pushed them to tighten supervision of commercial banks with large amounts of bad debt.

Zhin told FSS executives to make sure local banks keep their bad debt low, saying that large amounts of bad debt may result in banks being unable to lend money to people or companies in urgent need and therefore negatively impact the recovery of the domestic economy.

Bad debt accounted for about 1.8 percent of total debt held by local banks as of last year, the highest level since 2010 when the ratio of bad debt reached 1.9 percent, according to FSS data on Monday. The bad debt ratio is higher than American banks’ 1.59 percent and Japanese banks’ 1.53 percent, the FSS said.

The sheer volume of total bad debt is estimated to be 30 trillion won ($25 billion) last year, up 24 percent compared to a year earlier, largely due to a sharp increase in insolvent corporate loans.

Korean banks’ bad debt coverage ratio also hit 112 percent last year, the lowest since 2010 when it was 108.5 percent. The ratio has been constantly lowering since peaking at 159 percent in 2012, falling to 124 percent in 2014. The ratio shows how much a bank holds in reserves compared to its bad debt, and indicates how easily a bank can cover that debt should it become unpayable.

Usually, a bank is considered financially sound if the bad debt coverage ratio lingers slightly above 100 percent. Zhin argued out that the ratio at Korean banks is still insufficient considering how quickly the amount of bad corporate loans has increased.

“We’ll mostly encourage state-run banks and regional banks to work on getting rid of bad debt and put more money in reserves because the ratio of bad loans at these types of banks was higher than at commercial banks due to heavy amounts of debt lent to troubled industries,” said Lee Jae-yong, vice chief of the special bank division at the FSS. “Overall, commercial banks are in a better shape.”

Corporate debt accounted for 93 percent of all bad debt in Korea as of last year, worth 27.9 trillion won. They also increased more sharply than bad loans overall, by 29.7 percent compared to a year earlier. This was largely because troubled shipbuilder Daewoo Shipbuilding and Marine Engineering recorded a net loss of 5 trillion won last year alone and shipper Hyundai Merchant Marine had unpaid loans worth 2 trillion won.

The ratio of bad debt in the troubled shipbuilding industry reached 12.92 percent. That ratio in the construction industry was 4.35 percent, much higher than the average corporate bad debt ratio of 2.56 percent last year.