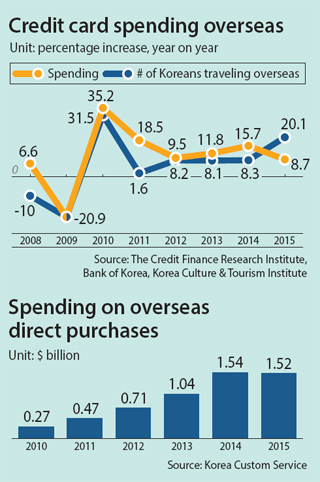 Last year, Korean credit card spending grew at its slowest pace in six years. But this was mostly because of the strengthening of the U.S. greenback against the Korean won rather than a fewer number of Koreans traveling abroad.

In fact, the number of Koreans that traveled to Japan grew more than 40 percent year on year.

In another twist, direct purchases from overseas online stores dropped for the first time largely because of increased consumer dissatisfaction.

But during the same period, spending by foreigners in Korea has dropped to the lowest since 2001, when the data was first collected, largely because of the Middle East respiratory syndrome (MERS).

According to the Credit Finance Association on Monday, Koreans spent a total of $13.3 billion last year. That’s an 8.7 percent increase compared to the previous year. This was the slowest growth in credit card spending since 2009, when spending plummeted 20.9 percent year on year in the wake of the global economic crisis.

Even when compared to the spending growth in 2014, this was a 7 percentage point drop.

But the significant drop in spending was largely caused by the strengthened dollar, which appreciated 7.4 percent against the Korean won, a turnaround from a 3.8 percent depreciation of the U.S. dollar the previous year. In fact, the number of Koreans that traveled abroad grew sharply, from 8.3 percent in 2014 to 20.1 percent last year. This was the sharpest growth in Koreans traveling overseas in five years.

By country, Koreans spent the second-largest amount in Japan, with spending in the country growing 29.6 percent year on year largely thanks to weakened Japanese yen against the Korean won. The yen depreciated 6.2 percent against the won. During this time, the number of Koreans visiting Japan surged 45.2 percent.

The No. 1 spot was taken up by Luxembourg, in which Koreans’ spending surged 68.6 percent year on year. But it wasn’t because Koreans were rushing to visit the tiny European country. The increase was largely because mobile payments increased substantially, and the nation is the headquarters of the online payment platforms of many of global IT companies, including Apple, such as iTunes, Paypal and Amazon.

On average, direct overseas purchases had been growing 56.4 percent each year between 2010 and 2014.

The drop was largely the result of increasing dissatisfaction with products purchased overseas, leading to cancellations and returns.

Spending by foreigners in Korea last year fell 13.2 percent compared to the previous year, to $10 billion.

“MERS caused the number of foreign tourists visiting Seoul to drop sharply, and this brought down overall credit card spending here,” said an official at the Credit Finance Association. “However, we expect this year that spending will gradually grow since the situation has ended.